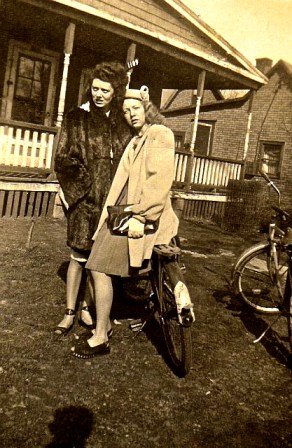 Here she is with her lifelong friend in this picture, who still misses her and all the fun they had, terribly.

This is Opal Jeanette back when she could be called whatever she wanted.

“Honey, don’t get married.  You will regret it, I know, I did twice.  All it takes is one woman with hot panties and any husband will fail that test.  You will be raising that man for the rest of your life.  And whatever you do, don’t have kids.  I loved my kids more than the world.  It just ends in worry and heartbreak.  I am grateful for my children and grand babies but you will never feel a moments rest.  The worry.”

These are the words I heard for thirty-eight years from my southern grandmother.  There were several variations.  After I married she would change it to, “Now honey, I told you not to get married…”

Then once I had kids she changed it to, “I told you not to have kids but now that you do all you have to do is love them with all of you, but don’t spoil them like I did.  If you do they will just be tore up with jealousy and not get along and then they will break your heart.” 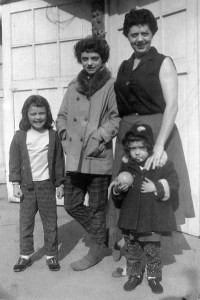 If she knew my husband and I were having a disagreement she would say, “You didn’t listen to me when I told you not to get married and you got married anyway.   Now sister, the key to marriage is EN-DUR-ANCE, endurance.  We women just have to endure these husbands and families.”

I am sure when reading these words, one would be drawn to the conclusion that she might not have been the best grandmother.  She wasn’t.  She could pick and choose who in the family she liked and it could change in the wind.  Probably the only time she consistently loved someone was when she loved me.  It seems to be easier to love a grandchild.  Perhaps one realizes you do the best that you can by the time grandchildren come along.  She was the best grandmother, to me.

She had two marriages, four daughters and six granddaughters, just one grandson and sixteen great-grandchildren.   Two of her children died before she did.  Her youngest was stillborn and full term and she lost my mom when my mom was 39.  She grew up in the mountains of Tennessee and moved to Michigan as a young woman.  She died last year during Mother’s Day week at her farm.  I promised her she would stay in her home until the end. 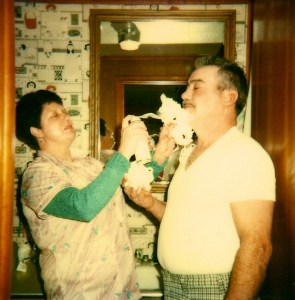 She missed my grandfather that had died a few years before.  The same man she complained about for their entire marriage.  The same man she asked me to find the medication you give a drunk to make them sick if they do have a drink.  She wanted to sneak it in his food.  She also asked me, when came out, if I could get my grandfather some of the little blue pills.  When I began laughing uncontrollably while covering my ears she began laughing uncontrollably too.  She told me that one day other people might think of me as an old lady, but I won’t feel like one.  Through her laughter she told me that old ladies, “Still have needs.”

She taught me many things, like insight to the various stages in life and the reality that no relationship is perfect and how to make a roux to get a good gravy. 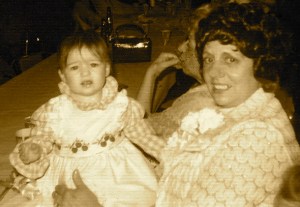 Here we are together.  I lived with her until I started kindergarten and then about any time when I wasn’t in school.  She watched over me for the rest of her life.

She always had a home cooked meal waiting on the table for my grandfather when he walked in from work.  One day she sang and whistled and nearly floated around the kitchen while preparing his supper.  When we all sat down and began passing the dishes she announced with a grin, “I read in the paper today where your girlfriend died.”

He sat silent and eating.  I stayed silent too.

She often liked to talk about ways to poison someone so it wouldn’t be detected during supper. At the end of my childhood I had deduced that the best way to kill someone was ground glass.

The truth, she loved him and he loved her more for over 50 years.  She loved her family the best she could.  I have learned to accept people based on the relationship I have with them and how they treat my little family, me, my husband and my children.  No one has ever treated us better that she and my grandfather did.

When I had our twins and they were premature and sick and I had a husband in medical school.  They came three times a week to rock and hold the twins so I could shower.  They would walk in my home with diapers and groceries and just put them away in our little kitchen. 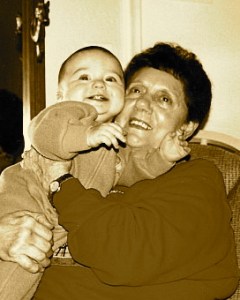 This is Mamaw with Avery when he was a baby.

When I didn’t go back to work because of our babies surgeries and specialists appointments the first year and we couldn’t afford a second car, they just dropped one off one day.  One time I was rocking two crying babies in the afternoon.  I hadn’t showered because the boys were grumpy and she told me to just put the babies in their swings and to go take care of myself.  When I told her that babies should be held and not put into machines and that we don’t even have swings she said, “Oh, bull$hit.” and she and my grandfather drove off and bought us two.  They they came right back and he put them together for us.  She was a genius.

She may not have wanted the burden of a family once she had it but she took care of us all.  The family she ended up with was her cross to bear, she liked to say.  There is a restlessness in some of us, like my mom, that my grandmother recognized.  She never could figure out how to “mother” that.  She never could figure out how to manage her own restlessness.  I think that is how she was able to accept my grandfather and their children.  She saw herself in them.   It didn’t mean she didn’t love us.  She just loved us all differently.

I flew up to be with her and stay beside her as she was dying.  I laid next to her at night and listed as I thought every breath would be her last.  I washed her and carried her and massaged her swollen body and did thing for her that made her cry that I had to.  We all have some dignity that gets in the way of help.  I told her that it was my pleasure and that I wish I could do more to stop the pain.  We talked like we always had, when she was alert and between the moments of confusion. 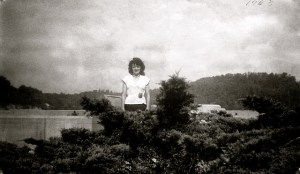 I told her I would stop being selfish and that she could go.

I told her how much love I had for her.  It was a blessing to be able to tell her how thankful I was that she had indeed gotten married and had children and stepped in to care for me.

I told her that she taught me to give and how to give.  To give even when someone isn’t asking and to talk to my kids honestly about life, those are the gifts she gave me and that are part of all that makes me.

Abbie, All that makes you…  allthatmakesyou.com

What kind of grandmother did you have?  Was she the picture perfect grandmother with an apron on?  Did she “tell it like it is” like mine? 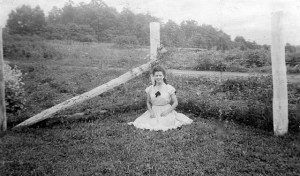