Peter woke us up at 5:00am complaining he had a terrible nightmare. I tried consoling him and giving him happy thoughts so I, I mean he could go back to sleep.
After tossing and turning he declared he was too disturbed to go back to sleep and went about starting his day earlier.
He has unicyle before school and so I picked up our sweet younger neighbor girl.
When she got into my car I asked her how she was and she replied she was good.
This immedietly sent my child, still worry eyed, into, “I am not ok! I had a dream I killed a guy last night.”
I didn’t realize he murdered someone in his dream and now I am watching him in the rear view mirror with my worry eyes.
She says, “I don’t see how that is bad for YOU! I mean, you did the killing.”
He says, “I couldn’t get the hole dug big enough.”
She says, “That is a mortal sin.”
He says, “Huh? It was a DREAM.”
She says, “Well, we are Catholics and now you need to go confess to a priest.”
He says, “I am not confessing about something I did in a dream! I mean I am just as disturbed by why I would even do it in my dream but I don’t need a priest.”
She says, “I still don’t know why you are bothered because you got to do the killing.”
I may be laughing all day about this.
My kid is so bothered as he wouldn’t hurt a flea.
Our sweet pup caught a squirrel yesterday, much to her and my surprise. The little guy lived but we kept calling our fluffy poodle harmless dog a “murderer” and “killer” all evening because none of us thought she had it in her. 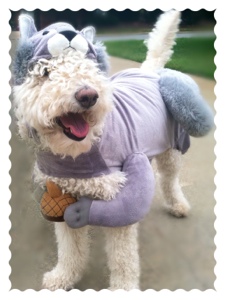 Our youngest had to go and make sure the squirrel was ok. Add to that and all three boys and Jim have worked for two straight days with shovels building trails in the woods to ride dirt bikes on. I am sure it was all the dirt they moved and our silly dog catching a squirrel.
I hope.