“It is best to simply try and not think of the missing lizard when you are visiting our home.”

This was me practicing how to break the news that a lizard is missing in our house before our guests arrived in 30 minutes.

Oh, I should add…

“In the grand scenario of things, the lizard probably escaped out of the window we discovered WIDE open and that we determined had been open for three weeks, back when the ball was on the roof.

Don’t look at me all Judgy Judy as if I have time to check all of the 37 windows every day, which is what a mother of three boys would have to do.

I would worry far more about what could have slithered or crawled IN that window.”

Yeah, that is effective.

If I had daughter we would be discussing who brought their rainbow looms and what nail polish colors are in style.

You see our friends that are coming have two lovely demure daughters.

We would be Instagramming our nails with ponies painted on them if we had three girls instead of three boys.

The friends came and no surprise that the reptiles showed up for the party too.
You may not count Peter sneaking up behind my girlfriend, who was sitting on the couch relaxing, and dropping a snake on her.
You cannot count that because frankly coming into our home you should expect THAT to happen.
My friends weakness though is spiders.
My boys fantasize about create a flying spider, just to torment Mrs. C.
Ok, I would fund THAT grant because if I am going to have all boys I can at least enjoy the mayhem and hilarity that would come from her having a flying spiders after her.
She is a “slow blinker” and I explain what that means HERE in the post called “Two Broke(n) Girls.”
I need a moment just to envision her running and fast blinking.  I love to torment her and since I cannot just walk to her house and leave a bloody handprint on her front door since she moved, I can dream of genetically modifying a spider to fly and chase her.  I did send her a candle last year as a house warming and put a plastic spider under the jar lid for her to find while smelling.
I have no idea why I have ANY friends at all.  They are all masochists.

Ok, back to the missing green anole.
Here is the thing, anoles are not very nice.
They breed them to sell to be fed to bigger lizards.
When you are born to be  sold and then turned into someone else’s meal it makes you bitter.
Here is a green anole biting Peter when he caught it on vacation.  He is not green because he is not happy! 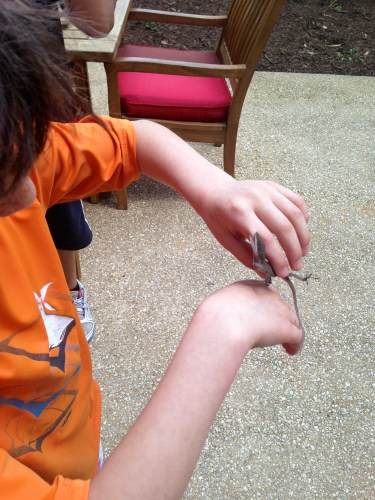 You know what makes you really bitter?  When you bite someone and they cannot feel it because you are such a little runt.
Peter was laughing at him while I took the picture.
It is a cruel, cruel world.
Here is the little fellow once Peter quickly “tamed” him. 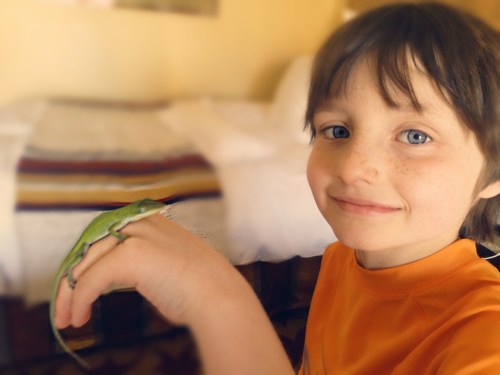 Yes, I live with “Nature Boy” and frankly he should have an animal blog because he is an animal genius.
This green anole was let go before we left Texas on an airplane.
Are we the only people that have kids that catch a “vacation pet” to keep a week in a hotel room?
WHAT!  You don’t bring your kids on vacation with you?!
There I was today cleaning out the cages of “Nature Boys” critters and giving them warm baths.
You read that right.
Giving.  Reptiles.  Baths. 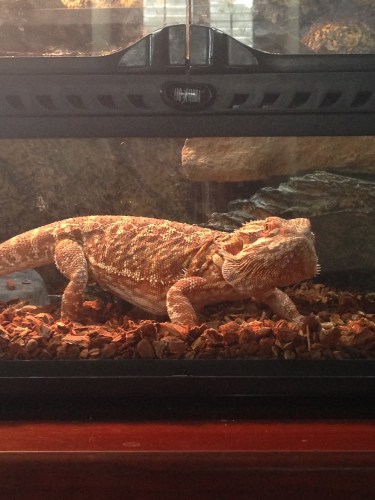 This is Bubba Watson and SHE is begging me to let her out and give her a warm bath.
People, this is what my life has come to!
I used to be a little bit cool.
I now bathe lizards, not to make them smell good, but to help them poop people! 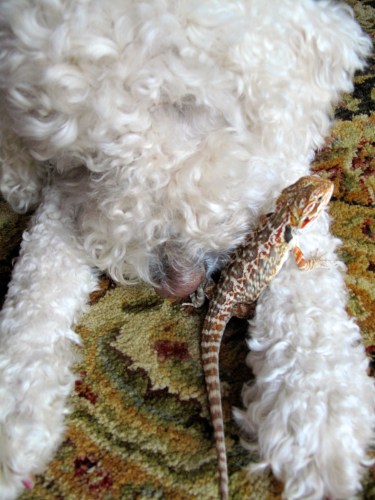 “Mom, Bubba Watson* needs a warm bath again!  She smells constipated.”
Said by our very patient labradoodle.
*Lizard was named while she was too small to tell if she was a boy or girl.
So I am misting the hermit crab cage  with water because who would have thought they breathe with gills and need the air moist or they will suffocate and feeding the snake crickets, which by the way Peter tells me we should be so happy to be raising because crickets are at the very bottom of the food chain.
That is right.
I am a operating a cricket house of sin.  We have a thousand or so chirping crickets in a tote and I am letting them “get it on.”
They are only sexually mature enough to start laying eggs when they are chirping.
They need a heating pad for the tubs of dirt where the eggs hatch.
A little Norah Jones and a bottle of cabernet.
Ok, well that is for me so I CANNOT HEAR THE CRICKETS CHIRPING!
Want to know what is worse than a THOUSAND chirping crickets in your house?
The fact that they smell like a chicken coop!
Peter tells me that if say, the Zombie Apocalypse happens, then we could sustain ourselves on these crickets, (which I remind you again, smell like chicken poop.)
We are so smart and fortunate.  Right?
Back to today in what was supposed to be called “the school room” but the boys actually call “the reptile room” I was all stinky and had all eyes on me while each critter awaited its spa time when I noticed under the missing anoles cage a gray, thing.
Oh no.  How long had it been dead?  Do I tell Peter or just let him continue to think he did escape out of the window?  Ugh, I hate touching dead things and especially dead pets.
I picked up the cage and the little guy was stretched out horizontally with his arms and legs balled up.  He was still and I could see every little bone in its shrunken skin,  I thought I could push him off the table onto a piece of paper.
When I poked he just was stiff, but he blinked?
I decided to quickly pick him up and warm him with my hand.
I started a warm bath to rehydrate him.
I held the little guy in my hand and let the water trickle over.
Then I found a couple of tiny crickets and I dipped them in water before hand feeding him.
A few drops of water in his mouth at a time and then I put him right back into the cage he was trying to get back into and I turned on his UVB light and basking light.
About an hour later I took a video to send the twins, who are in Washington DC with a school trip, to show them who I found.
It is amazing how strong the will to live is, even in a rotten little lizard.
I think he loves me now. 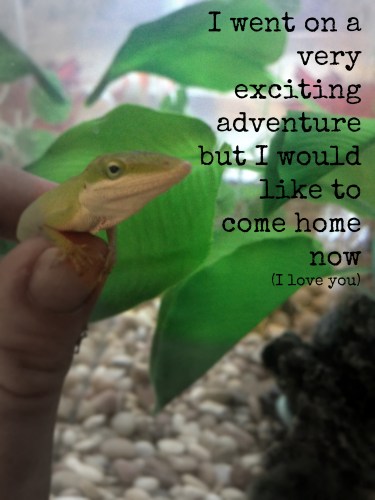 A friend said it looks like he is smiling.  I told her no.  He was probably trying to figure out how to bite me while I kept feeding it and petting it.
He will be trying to dart out of his cage soon enough.
Keep in mind he was being sold in a pet store as a feeder lizard and so my littlest guy feels like he rescued him.
Peter was so happy after school.
I used to be cool but now I am “cool mom”, (who smells like a chicken coop and spends her days helping constipated lizards.)
What is the weirdest pet you have ever had?
Growing up it was hard to tell what was a pet and what was going to be dinner but we never, ever had a reptile!
We might have if it could have been bacon.
I cannot believe I have the chicken coop smell without a stinkin chicken and we always had about 250 a year.  I know what a chicken coop smells like!
I now know what a chicken coop smells like in my house.
Thank goodness for isolated golf cart garages down in the basement or as I like to call it, the chicken coop.

Like and subscribe to my Facebook page: All That Makes You
Twitter @allthatmakesyou
Email me at: allthatmakesyousmile@gmail.com
PS If you are a publisher or producer email me and I will give you my phone number. If you are Child Protective Services email me and I will give you the phone number of someone I don’t like. If you want to come and help me fold clothes and put them away I will give you my address and a big kiss.
You might enjoy these stories and further proof the kids are all NUTS, (and they might get it from me.)
1.Signs You May Be Raising Huck Finn, Tom Sawyer or a Mark Twain Character
2.An Update With Nothing Dead to Report
3. Recovering Emotionally From River’s Carnivorous Seaweed