Signs you might be raising a Mark Twain Character.. 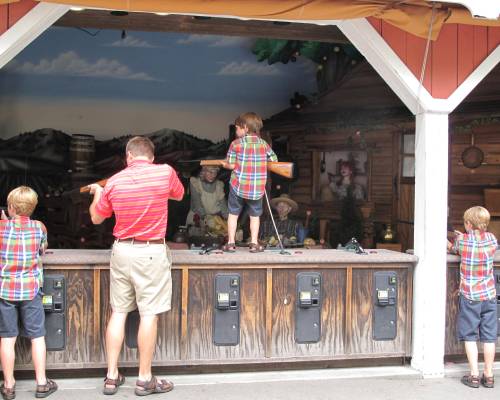 1. You keep old rusty nails in your pocket and you pretend to find them all over the yard to try to scare him into wearing shoes.

2.  When you pick him up from school he climbs into the backseat and says in his sweet I’m talking to a critter voice, “Oh, there you are!  I have been looking all over for you!” He is NOT talking to YOU.   That has you wondering WHAT you have been driving around with inside of your car, unaware.

This critter he saved from the pool skimmer.

Oh the tears from having to release him back into the wild!

3. You use a potato scrub brush on him AFTER he has showered.  You wait until after he showers so that all the debris falls off and you can easily identify the leaches and remove them before using the firm potato brush.  There is nothing grosser than making “leach jelly.” 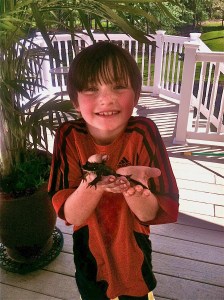 4.  You realize you probably don’t have to make him wear a life jacket in the deep end of the pool anymore when you see him swim across the pool holding two plastic cups together with a collection of bees he caught inside.  Little boys will always travel the shortest distance to show their mom something cool.

6. You keep an IV antibiotic drip bag on hand because you know the CDC, (Center for Disease Control) is going to have a hard time figuring out if the salmonella came from what he has caught and kept in his pockets or the raw eggs he keeps blowing out all over your house.  I made the mistake of telling him we cannot keep eggs because they will rot. 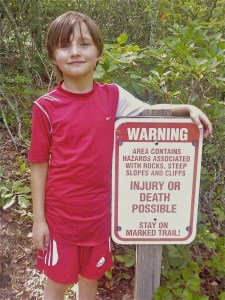 7.  He gets invited to his older brother’s friends slumber parties as a “special dinner guest”.  He is the only boy and I need to pick him before they go to bed.  When I ask him how it went he replies, “Disgusting.  All they did was carry me around arguing over who was going to marry me.” 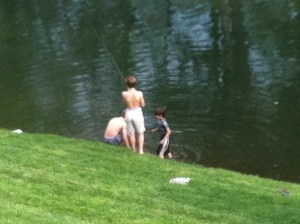 8. He has begun his own “Hillbilly Hand Fishing Academy for Kids” in your backyard pond and the “country club kids” have the classes booked.

9. He lobbies for new “pets” by hacking into your FaceBook and Pinterest page and “likes” and “pins” “veiled chameleons” and “alligator snapping turtles” so now your friends think you have lost your mind…and then some repin them?

10. You ask him what he did with all the butterflies he caught and he say’s, “Oh, they are in my underwear drawer” and runs off after another one.

11. Your getting fat because you are trying to keep him in recycled plastic containers to make “habitats.”  No one wants to open a drawer and have something fly out. Also, how much sherbet can one woman eat?  A lot.  I would say enough to house a half a dozen turtles, two dozen tadpoles and something that no one has yet identified but he is sure it will turn into “something.”

12. He builds a Robin’s egg incubator in his nightstand.

13.  When you tell him he is going to burn the house down with the nightstand egg incubator he tries to hatch a goose egg with his stuffed animals.  Now you have a leopard that is going to have to raise a goose if he is successful. 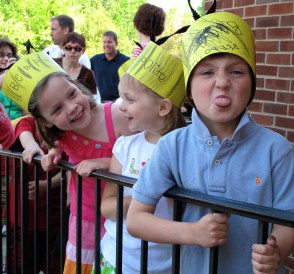 14. Another mom calls to tell you she can’t figure out what she is more disturbed about concerning what her daughter told her, (you dread these frequent phone calls.)  One, that her daughter informed her with great delight that she was your sons “number three girlfriend” or that her daughter is four years older than your kindergartener.  When you confront your son to teach him that girls are not objects he replies, “OK, but don’t tell her there are TWO number three girlfriends, alright?”15. You have your own stash of cereal, cookies and chips because you KNOW where his hands have been. 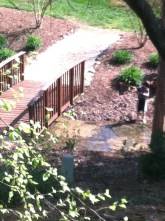 Look closely.  Do you see him with his net?16. You ask him to wash the car and when you come out to see how it’s going you find the neighbor kids doing it instead.  When you yell out for your son he answers, “I’m over here in the shade playing the bongos so they have music to work to.” You notice he also has a toad sitting on the top of his bare foot. 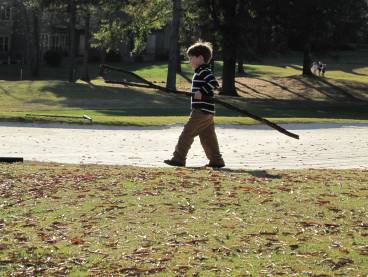 What kept him busy during his brothers golf tournament.

There is so much to ask.

-Abbie (I’m with that kid in the pond over there)