We are no longer referring to our 2013 trip to Disney as such.

It is now being called, “The Trip that WE Shut Down Orlando International Airport.

Come on, are you really surprised?

I have all three boys with me at the conveyor belt while all of our shoes are in buckets and I forgot to wear socks (ewww), laptop out, belts off, and just the general feeling of being half naked.

Additional TSA agents called to our conveyor belt while our carry on items were inside the xray machine.

There is an entire HOUR long line behind us waiting, waiting.

Our items are still in the machine.

Big boys are so upset and “It’s all Mom’s fault!”

When the agents began taking pictures of the monitor of the X-Ray machine they redirected everyone behind us into other lines.

I smiled sweetly, barefoot and vulnerable to everyone behind me who were making the poop face at us.

I mean, how ruthless can I be with two thirteen-year-olds chastising me and questioning what I did to get us all “arrested.”

When they started calling more people to the x-ray machine I bent over and whispered in Peter’s ear that I was sorry and that I will buy him a new one but they were probably going to take it.

He was trying to be so tough but he is only eight.

He put his fingers in the outside corner of his eyes to try and pull his eyes taunt to hide from his brothers his tears.  But they wouldn’t stop and they noticed.

Now it was “All Peters’s fault!”

I gave him lots of hugs and tried to lighten the mood because EVERYONE in line behind us is clearly watching too much “Homeland” and giving us all the evil stink eye.

I laugh at all the wrong times.

Thank you TSA agents for laughing in a huddle too!  Eventually.
Clearly they were all little boys once who had a wooden toy musket with a steel barrel.

It is soooooo big it wouldn’t fit in the suitcase.

I boxed it and told the agent at the desk we would need to check it and he said that it was fine because it was boxed and to tell the folks before we get in the line.

I did but that guy told me they would confiscate it and we could NOT take it.

I whispered it in Peter’s ear and I saw the heartbreak in his eyes. So I just put it up there and decided to let the third person tell me to toss it or not. 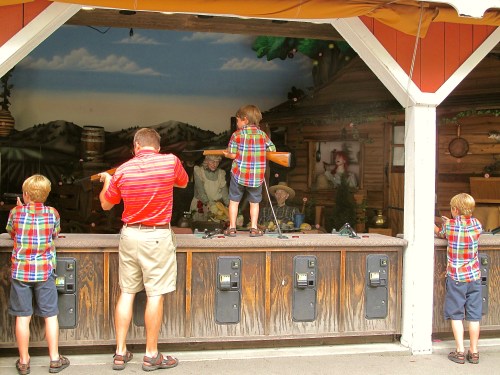 Do I not deserve an ENTIRE week of pink, spa and glitter?

I decided that it was one opinion against another’s and the third person working at the airport would be the tie breaker.

I don’t really watch sports so this was like my Superbowl with TSA.

It worked because they shuffled me back to ticketing, let me check it and escorted me back through security.

Best part, (other than not getting a cavity search or arrested)…

They let the boys hang out with the TSA agents while I legitimately checked our FAKE Disney musket. 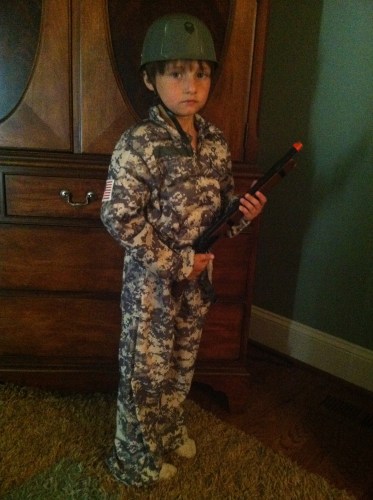 We all eventually laughed about it but boy are the big guys wound tight.

I think they would turn me into Homeland Security.

I had them lecture me to stop calling it a “gun.”

On another note the airline lost the sushi set I bought???

Oh, and they decided to search Peters’ backpack. 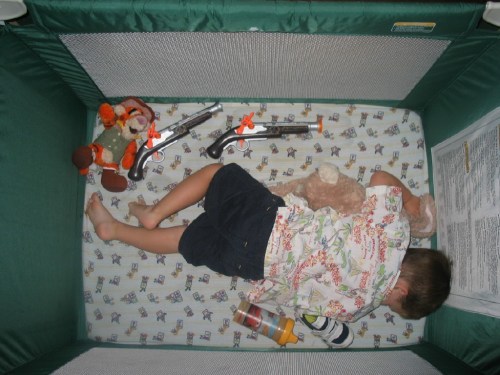 His 1st Disney Trip. Animal Kingdom and we paid extra for animals off our balcony. At 2 he spent his time shooting them with his Pirate’s of the Caribbean guns. It is wired in his little boy brain.

They were all cracking up at all of the cut and polished rocks he had.

You know that if we weren’t already on a terrorist watch list from Peter constantly searching online for things like “how to make a flamethrower” and “turning a bbq lighter into a combustion gun” then we are now.

Could I count on you to come bail me out of souvenir jail? 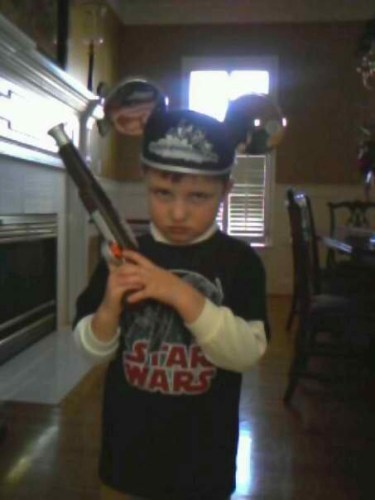 They did tell me the TSA has a blog and we might make it on it.

Perfect ending to a Disney vacation!

Perfect for my brood of boys anyway.

I need to show his “normal” Disney side too. 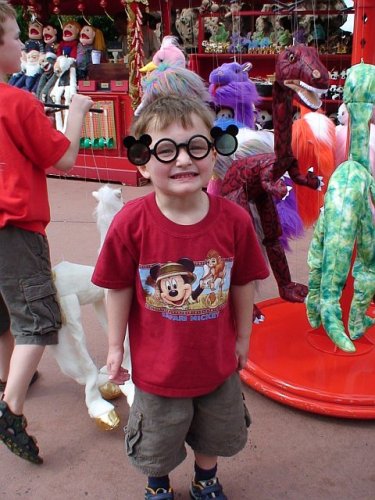 The “Magic Kingdom” gets a little more magic when my three boys are there.

Do you still love to take the kids to Disney?
Do you see certain fixations your kids have as just being wired into who they are?

We don’t hunt and we aren’t gun advocates.  I also think the more I refuse our kids something the more obsessed they get about it.

Have you taken the “this too shall pass” approach?

Like and subscribe to my Facebook page: All That Makes You
Twitter @allthatmakesyou
Email me at: allthatmakesyousmile@gmail.com
PS If you are a publisher or producer email me and I will give you my phone number. If you are Child Protective Services email me and I will give you the phone number of someone I don’t like. If you want to come and help me fold clothes and put them away I will give you my address and a big kiss.
You might enjoy these stories and further proof the kids are all NUTS, (and they might get it from me.)
1.Signs You May Be Raising Huck Finn, Tom Sawyer or a Mark Twain Character
2.An Update With Nothing Dead to Report
3. Recovering Emotionally From River’s Carnivorous Seaweed