I have been voicing my constant worry since my three boys started talking.  What keeps me up at night?  I don’t want to be that poor mother on Jacka$$.  You know, Bam’s mom.  The mom that they set fireworks off at night in a trash can in her bedroom, while she is sleeping.  I am worried my boys, (and me, the victim) will be the next generation of the Jacka$$ cast.

I found a video Peter left on my laptop last night that I found this morning.  I just had to share it with you.  Apparently, he wants to be like his older REAL identical twin brothers.  He cannot even keep a straight face.  It’s really short but has me rolling laughing while having my coffee this morning.  Just click the link to my Facebook page or try this…

I think he was drunk…on leftover Easter Hawaiian Punch, (judging from his red mustache).  You can hear his funny scratchy voice.  He loves to say, “dang” but I know in his head that is not what he’s saying.  I have worse things they have done but sharing the pictures from the Christmas we bought them the digital cameras and found them giggling in the bathroom with the cameras shoved down their pajama bottoms, is probably not appropriate.  You always open a closed door to a room when you hear three boys laughing so hard they are gasping for air.

I started coping my posts over at BlogHer to figure out where I belong since I started sharing my stories Feb 29th.   They featured my Easter bunny story Friday.  It was super exciting, (for a nerdy girl like me.)  I still haven’t decided where I will park “All that makes you…”   I enjoy the WordPress crowd but know I have a ton to learn.  Oh, a girl can dream of getting Freshly Pressed but they must have “punctuation rules”. 😉

I will have a story tomorrow so follow me and GO WATCH THAT VIDEO AND HEAR ONE OF PETER’S STORIES!

Here is the link for the featured story on BlogHer.

“Colored Chicks Banned From Country Club” was funnier I thought! 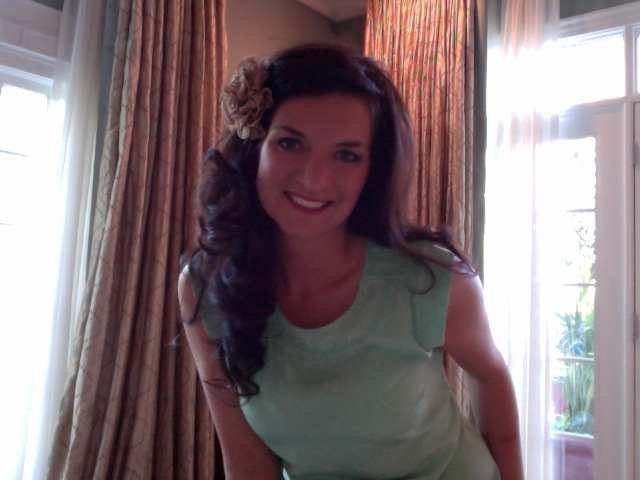 That is me.  I am trying to follow other bloggers advice in using a picture of myself for my site.  I personally like our Norman Rockwell photo that wasn’t planned where the older boys are saying, “Come on!  If you would just smile Peter she would STOP taking our picture!”  But hey, I will snap pictures of myself with my laptop versus folding clothes anyway!

Elliott found my laptop because I was trying to get a PhotoBooth picture of me for my Gravatar.  He who takes the photos in the house, has no photos of themselves.  Our boys have taken up “Hillbilly Hand Fishing” in the pond which means I do NOTHING BUT WASH CLOTHES, poorly.

Having the laptop out snapping pictures has made for two future posts with “happenings” going on behind the pictures of me…those poor, poor Peeps.  I can’t wait to write that story…with the pictures of Jim and Peter behind me….the poor Peeps between them.  Their faces say it all.