So do I really need to tell people the things that explode out of my face?

Sometimes I don’t say anything, when something should be said. I like to see the uncomfortable faces.

It isn’t as if I even look like there is a possibility being a stripper is my career, unless it was in a very unsuccessful club. But I still found a way to assure the oral surgeon today that I am NOT a stripper. “I just have glitter all over me because I’ve been decorating for Christmas” I tell him.

Why do I say these things? I have had an MRI, (to confirm I have indeed wore out my jaw from talking) and incidentally my physician husband confirmed I do, indeed, have a frontal lobe.

We have been together for 21 years and I am sure there are days he questioned whether or not I was born without a frontal lobe to filter what I say.

There was the time we moved to the south and the attorney handling the house closing told me I could “just wait in the lobby while they (the men) do the paperwork.”

He opened Pandora’s Box and Hell’s fury came out of my mouth.

There was no cursing. No direct complaints.

First things that began out of my lips…
“Oh, really. Ok.”
This next part was not intentional to insult my husband but I said it and I have to take ownership for my faulty frontal lobe.

“Hey Sweetie, what bank are we using? Interest rate?”

This wasn’t said to embarrass him.
“Sounds like I need to be there.”
Making squinty eyed smile.

Once I get into the conference room for the signing of the papers, the words begin flowing out between my lips.
I don’t even know where it came from.

The important half. My mom’s mom. I make a mean gravy of any kind and I know a little sugar and butter make everything better.

I even said that in Michigan we close on houses in crappy title offices and not elaborate over-priced fat-old-attorneys offices because some North Carolina good ol’ boy legislature decided to pad his buddies from law schools pockets with requiring home sales to take place with an attorney. Oh..,yes…I…did.

That expensive rug may have set me off.

I was full of southern slurs.

We drove all the way to our new home with Jim asking me if I’d gone mad.

I kind of had gone mad, I guess.
I did it in true southern style though, with a smile on my face. 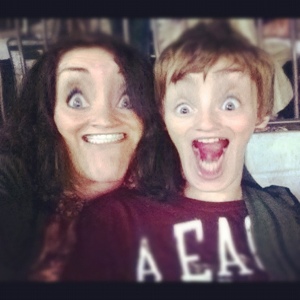