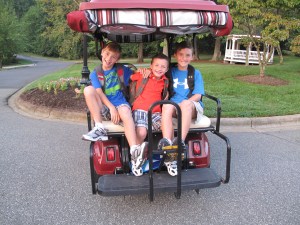 All three and all goofballs

One of the biggest indications that we no longer have all LITTLE boys happened this spring. I had just the twins in the Suburban and, while in a drive-thru, they started bombarding me with questions about how our dog Lilly could be half Australian Lab and half poodle. After explaining many times that there was a mom that was a poodle, the lab was the dad, and the babies were Australian labradoodles, (I am fully aware she is a mutt) one of them asked, (very annoyed at my vague answers) “But how did the dad get the lab IN the poodle?!” So I pulled out of the drive-thru and thought “Where is their dad?” I parked the suburban, turned around, and said “We have been waiting for the right time to explain some things and I guess that time is right now.” Yeah, were having “the talk” at a chicken-joint. All things considered and without forethought, I must admit I did a stand up job for a mom to her sons. When they asked when they will do this, I quickly explained that once they had a college degree, a good job, and owned a home with a spare bedroom they could…because they would make a baby and would need a place to put it! At the end of the talk there was silence, looks of disgust, and head tilts followed by a final outburst of “things make so much more sense now!” “How many people know about this?” “So EVERY person got here THAT way?” Then one of them asked, “Aren’t you sooo happy you and dad only had to do THAT twice to get three kids?!”