If you are my husband. Stop reading. I know you do sometimes and that is OK, but today, step away. Go shopping online for golf clubs if you’re between patients but staying here is just going to ruin our evening. Oh, real quick, if you did tell people about me writing after I told you NOT to…big mistake.

Call those people and tell them there is a widespread internet blogging virus that turns your computer’s insides to liquids if you login to any blog sites. Tell them you are sure “That Lady in The School Drop Off Line” created the virus since so many mom’s are complaining about her on their blogs. Now stop reading Jim and call anyone you told about allthatmakesyou dot com and lie to them.

Ok, now that it is just us…I need to tell you about a little problem I am having with my in-laws.

Jim, I swear to God if you don’t stop reading this you won’t like me tonight and it is way too close to the weekend and that means we willl both be mad at each other and you won’t be getting hanky-panky for two weeks!

Now that I know my husband is gone…

No one talks about this issue we are having. At least I haven’t read anything about the stage between “Annoying Parenting Advice From My In-Laws” and “Caring For My Elderly In-Laws.” There is a whole “middle ground” that has me all in a state.

My MIL and FIL have been divorced since the beginning of time. I reference time with when my husband and I began “raising each other.” That was 21 years ago. We were kids. We have been together since we were kids! We have been together longer than any of our parents have ever been with anyone. I personally take credit for any success my husband has had. I take credit he was not only the first doctor in his family but also the first person to GO to college and the first person to GRADUATE from college. Aren’t I full of myself? I don’t care what you think of me. I raised a doctor and I am only 39 so that means I am pretty smart, for a stay-at-home mom.

I know my husband Jim also takes credit raising me to be the only “sane” member of my entire family. Oh, don’t chuckle that I think I am sane! It is all relative as my family not only likes to make the “arrests” section of the local paper back in Michigan, (we are over achievers) we strive to make the “arrests page” the “front page” on the same day.

If you are going to do something bad like walk into the mayors house and make yourself a drink and sit down in the front parlor, (we lived in the house for ten years, before the mayor lived there) you have to do it with PIZAZZ! No silly, not me, I didn’t get arrested. My husband raised me better than that.

Since I have NOT been arrested, (yet) and since within a six month period all of my husbands family members managed to get arrested, (one of his sisters did make the newspaper and gave my mom a run for her money with “Lady With Shotgun…”) I think my my husband and I did a rather fine job of raising each other.

Thank you and again…we both take full credit for what wonderful well adjusted spouses we raised despite of our parents. Ugh, our parents.

Here is where it’s getting sticky…

His parents are both in relationships with other people. This is not the problem.

They come to our home for visits from out-of-state and stay with us. This is not the problem. Shocking right?

Holy crap bags, I cannot sleep for fear their “significant other” is going to sneak out in the middle of the night and leave Jim’s parents with us FOR-EV-ER!

My husband goes to work while they are here, in our home, and I am left playing marriage counselor or sounding board or BOBBLE HEAD all day. It is like confession time and I must look like someone that doesn’t tell secrets. So if telling secrets will get people to stop telling me secrets, then here goes…

I go in the living room and his dad’s girlfriend is telling me she can’t take his dad’s smoking and complaining. She is tired of picking up after him. That he never wants to do “anything.”

The last time his mom and “Her Man” were here I had to ask them to please not fight LOUDLY because my kids have school in the morning. “Her Man” was so sad telling me he wants to be able to travel now that his kids are raised and his parents deceased but my MIL has made it impossible…

I finally started taking my box of Corn Pops and spending a significant amount of time in my closet when they come to visit. It is just until the kids or Jim come home. I take my phone and call my best, bestie and run through the days antics, so far, with her. If she says I deserve “closet time” then I stay. 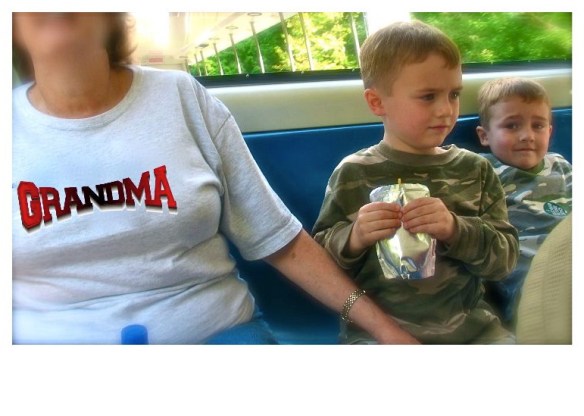 BTW, “My Bestie” has never thought I should come out of the closet based on my in-law stories. That may be because I keep her entertained. After all, the worst thing her parents ever did was buy her a charm necklace with an imprint of a plant that they didn’t realize was a marijuana leaf. Some people win the parent lottery, and the rest of us did not.

Hey, don’t judge unless you have had to start a conversation with, “Now MIL NAME, you aren’t fooling anyone by smoking in the bathroom. We don’t mind if you smoke but could you just do it outside?…. No, no, I won’t tell Jim, (your son and my husband) that you smoke.” As if he doesn’t know she started again.

This is NOT a problem seen through a daughter-in-law’s jaded lenses.

My husband brought the fear of his parents being abandoned by their “others” at our home to light.

One night, when his mom was visiting, we were laying in bed shell shocked after a marathon “counseling session” with his mom and “Her Man”. We were laying side by side staring up at the ceiling.

Jim says to me, “I don’t know. I mean, I know I should be honest and say if I think my mom is right but I don’t want to piss off “Her Man.”

I am like, “huh” and “what” all in my head because I know Jim. Jim always tries to see the good in people. Jim speaks up if he thinks someone is being wronged.

I am shocked and I say, “Why would you be worried about making “Man” mad?”

He replies, “What if he just leaves her here? I mean, she is to blame for plenty but I have to be careful. WE NEED THEM TO WORK THIS OUT!”

Jim is soooooo smart. I raised a smart doctor.

Every since that day I take all my visits with my in-laws very serious.

I mend fences. I tell the other nice things I have heard one say about their spouse . I listen to all their complaints and tell them that everyone I know hates their spouse and as long as they don’t kill them, it’s OK. I shove love notes in their bags and forge their significant others signatures. I send them books titled, “Weird Things to do in Florida” to try and get them to travel more. We “accidentally” turn on the porn channel in the guest room when they are here. Kidding, but you know it would work or they would at least shut the door so my kids could get some sleep.

Anyway, I have started taking half an Ambien when they are here. If when I wake up “Their Others” have left for greener pastures I will simply tell my in-laws we are going to lunch at a restaurant that looks like a fire station.

When they get out I will lock their doors and roll down the window and throw out a box of Corn Pops and speed off.

Have you had to raise your parents or found their “stash” under the claw foot bathtub when you were a kid? Do you want to help me get a bill passed that allows for “Safe Haven’s” to be established in every community for dropping off your in-laws, no questions asked?