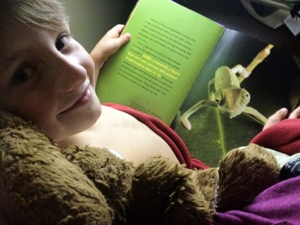 You will never guess what I was looking for in my bra today.

I have two things about my bra today that were VERY exciting.
1. I am wearing a brand new bra and it is actually super comfortable and I am tickled, (if you are a woman, I am certain you understand.)

I spent the afternoon wandering the house looking for my laptop thamy son borrowed the night before, to write a post, (a different one that I will now wait until tomorrow to share) when I went into what we call the “school room” (good God I do NOT homeschool – it is where they do homework and practice their instruments.) It is also what I call the “zoo.”
Peter’s obsession with reptiles led to us giving in and allowing a Bearded Dragon. We named him Bubba Watson and then Peter began obsessing about catching an Eastern Fence Lizard.

We weren’t worried as I had never seen one of these North Carolina lizards.

Then one day last summer our neighbor asked my kids to go to her “home parade” party in a neighborhood they developed and Peter was running out of the door.

I did not know that he new that the new development was surrounded by “prairie-like” fields. He KNEW this type of lizard likes to sun himself in this environment.

I still wasn’t worried. Have you ever tried to catch one of those little lizards? IMPOSSIBLE.

Soon after the texts from realtor friends started.

“I cannot believe how much your son knows about retiles. It is so impressive. Is he really only 8?”

“I have never seen anyone chase down and catch a lizard like your kid.”

I still wasn’t worried. Chances are he would lose it by the end of the party and it would get away.

Then I was sure it would die in captivity.

His name is Rory McIlroy.

Bearded Dragons are slow. They do not leap and jump and ours has never bitten me.

Rory, the Eastern Fence lizard is a leaping Road Runner.

The first time I held him, he bit me. I grew up on a farm. If something bit me we may have decided to have it for dinner and the only person my horse bit was my dad.

Lizards activity level is greatly determined by how much heat and light they get. If it’s cold, they are slow to move.

I thought we “tamed” Rory as he stopped bitting me and would ride around on my hand without making a run for it.

Then I changed his light bulb last week. The new light bulb is much warmer.

When I walked by his cage while looking for my laptop one of the boys borrowed, I noticed his cage looked hot. I decided to give him a spray of water to cool him off an keep him hydrated.

I opened his Biobubble and went to grap the spray bottle and realized it was across the room in the dark “hermit crab” corner. I decided to carry “Rory” because I know he will escape out of the bubble.

I held him under my palm and against my chest.

I felt him jump.

Between my fingers but because he is so tiny I cant feel him on me. I don’t know if he has jumped onto the black embroidered chair next to me or inside the open computer armoir to the other side of where I stood on SHAG carpet.

I decide to walk back to an open space in the room.

And this is when I found myself systematically stripping.

And this is when I found myself reaching into my bra feeling for a lizard.

Never in my wildest dreams did I ever think I would be looking in my bra for a lizard.

He was on the back of my cardigan, inside.

So how do you mother’s of girls spend your time? What was the craziest thing you went looking for in your bra?

Pray for me. Pray for all mother’s of boys.