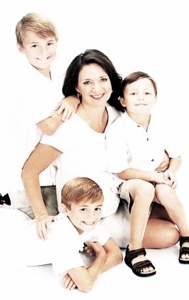 While driving to our youngest’s bus stop I noticed a Dad who is always there with his two boys waiting in their car, wasn’t. This is how I gauge whether or not we missed the bus on its last stop.
I leave earlier or later depending on all the kids morning activities.
This is the happy bus stop as it is the “sleep in 15 minutes later” bus stop on Thursdays.
I don’t know the folks at this stop as it is out of my neighborhood. I do know the Dad is there everyday. He gives his boys not only hugs but long hugs. He pauses and draws them even closer and whispers into their ears something that is only intended for them and then a kiss. EVERY. DAY.
I marvel at the time he takes to say goodbye, while a busy highway packed with people going to work in one direction and people getting to school in the other, is paused for the flashing lights and the stop arm of the bus.
I had never seen a Mom there.
I assumed she worked early or late the night before or maybe there wasn’t a Mom around anymore, judging how much the Dad doted on them.
When I pulled in I said to my youngest, “I don’t think we missed the bus. Maybe she came early. The boys and their Dad aren’t there.”
My sweet nine year-old said, “Oh Mom, I forgot to tell you, their Mom died this week.”
Then it hit me.
The tears and crying.
These are sweet boys that would get out of their Dad’s car and talk to my boys and pet our dog.
Those sweet boys.
That father.
Their Mom must be the Mom that I didn’t know that I heard died of breast cancer this week. She had been fighting it for years. Probably had been fighting it all of these lovely boys memory.
Once I dropped off the older boys at their school I finally had myself pulled together when our sweet electrician Earlie called.
If you ever read my story about the “That Time I Almost Rendered Earlie Late” you know he is helping us out often.
He is working on the new property we bought making sure as I put it, “no little boys electrocute themselves turning on barn lights while they are covered in water and mud.”
Earlie is a very southern gentleman, sometimes I need him to repeat himself, and he told me he wouldn’t be out to the barn-house for a few days because of his Uncle’s passing.
He began to get all choked up when he said he was one of his best friends and that he and his dad were a constant in his life.
So we both cried on the phone.
I cried for little boys who lost their Mom and for good Dads. Earlie cried for what he told me was an Uncle who treated him like a son.
We all have so much to be thankful for, even in loss.
We do have each other and we have the thought and prayers of people we may not even know are praying and sending good thoughts our way. I am thankful that I have a painful reminder that life is sadly unexpected and to let my boys know that even if they lost a parent that we have set up arrangements and that they will be loved and taken care of.
Some mornings we bicker about homework or quiz each other on test topics. This morning we talked about our blessings and how we don’t know what someone is going through and we should always hug long and give kisses. 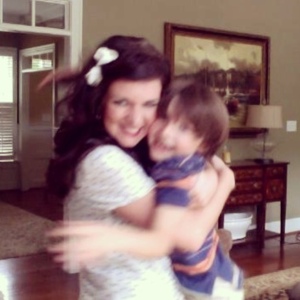 After I posted this I became aware of a Facebook page celebrating Melissa Clark and a way to donate to her young sons.
Melissa Clark Memorial Page 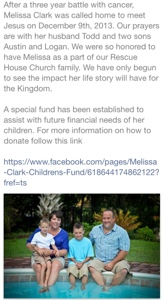 Abbie Gale
All That Makes You…
allthatmakesyou.com