Watching “old” sitcoms with our kids.

Do you remember Doogie Howser, MD doing things like an “emergency” pelvic exam…ON HIS GIRLFRIEND?  Well, he does.

Our three boys love watching Doogie Howser, MD with all its nerdy, dated glory and friend Vinny makes them belly laugh.  We didn’t remember the show dealing with such “racy” topics that have required some previewing by us before letting our little guys watch.   If you could have seen my husband and I running for the remote when Vinny was showing off the condom in his wallet he was planning on using that night. 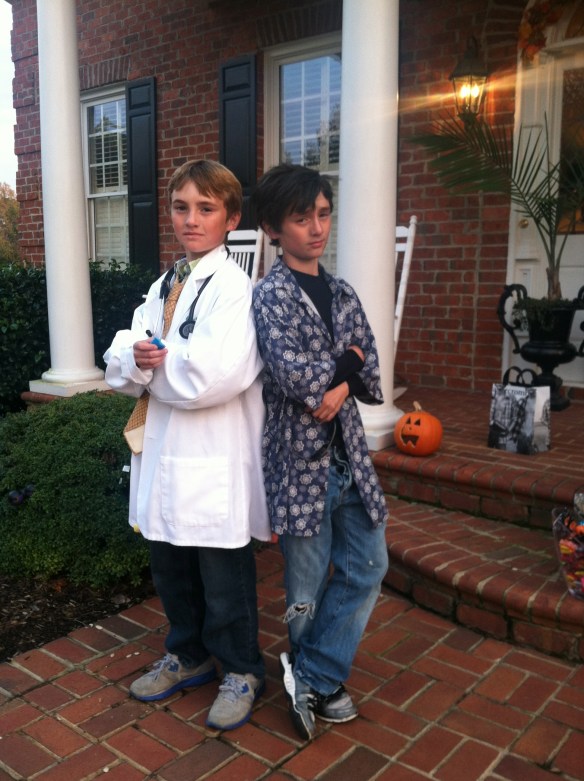 Doogie and Vinny, as played by our 12 year-old IDENTICAL twins, were last Halloween’s hit, (only with adults over 35 who knew who they were.)  It took an entire can of black hairspray to turn Avery into Vinny.

This picture shows how much they look like normally… 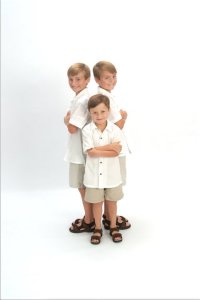 “Who wants to watch Little House on the Prairie with me tonight?”

Peter, “Why would anyone NOT want to watch Little House on the Prairie!”

I’m thinking Peter would make an awesome Laura Ingalls next Halloween. You have no idea how happy it makes me to watch Little House. 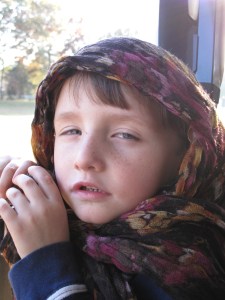 Peter wearing my scarf and offering me a poison apple.  Wrong show but you see what I mean with thinking he could rock Laura Ingalls this fall.

I always find it hilarious when the kids don’t connect that the actors are not REALLY the characters they portray.

We rented Smurfs to watch with our boys.  Peter, then seven, announced when he saw Neil Patrick Harris, “DOOGIE IS IN THIS MOVIE!  THERE IS DOOGIE HOWSER!”

Avery, who is twelve, looked at his younger brother with a very annoyed and sophisticated look said to Peter, “That is NOT Doogie.  I read this book and Doogie is not in the story at all.”

I don’t know if I should be worried about them all but I did what came natural.

I laughed at them all and told them they are all a bunch of DING-A-LINGS!

I explained, for the thousandth time that these are all actors and that was indeed Doogie but playing the part of another person in a different movie because he is an ACTOR!

Good Lord.  I know one day they will be adults and watch “Harold and Kumar go to White Castle” and I would LOVE to be a fly on the wall when they see all the things “Doogie” does in that movie.

It may wreck my boys forever.

Do your kids watch any “old” TV shows?  You have to love the DVR.  It may turn my kids into super geeks, but I am ok with that. 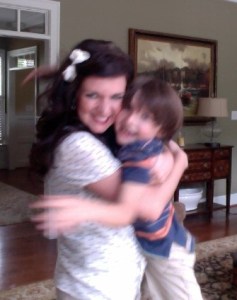