I rolled the dice yesterday knowing I live in a community of overachievers.

I figured if I waited until the last minute to vote, all my responsible neighbors would be done already.

I outsmarted the smarties!

I voted while talking to the poll workers slurring, again?!!!

I live in a small enough town that I always know about half the people that work the polls and nearly everyone in line.

How can I end up having root canals on the last two election days?

Of course I would!

I am a grinder.  I grind when people are saying things I don’t agree with and then I grind all night.

I hold all of my stress in my jaw and the result…crumbling, horrible, rotten teeth.

With a country divided in half I am grinding half the time.

Then by the time election day comes…”emergency” root canal!  😉

I can’t bring myself to vote the morning before the root canal as I am particulary grumpy and making the “poop face.”

I know they wont let me get a root canal in jail and so I go vote AFTER I get my root canal.

Last election I announced to everyone within 20 feet of me, “I just had a root canal.  I AM NOT DRUNK.”

I’m smarter though now, (and I may not care if the folks think I’m nuts since I now know half of everyone is a moron.)
Now I only talk to the people affiliated with the party I am NOT voting for that is handing out pamphlets.
I figure we both think the other is stupid anyway.
While I listen to them telling who to vote for I just slobber and tell them enthusiastically and with a drunken slur “Thank You!”
Now who’s questioning their party affiliation?
Not me.
The guy scratching his head watching me turn the ignition key and not doing a darn thing about it.
Yep, the “other party” letting the drunk soccer mom drive away.
Oh, come on, its funny!!!  It’s funny!
I pulled up a story I wrote on Election Day four years ago and thought you all might enjoy a laugh. I need a laugh today. Don’t know what I’m dreading more, the root canal or voting. The doc I will instinctually want to bite and the people at the polls I will want to instinctually want to thump in the head. Where is Sara Palin for comedic relief? I will tell you…read the story below.
Four years ago…
God help you if you knocked on our door this fall. You would be asked whom you were voting for and if you answered “wrong” they would completely be perplexed and troubled that you didn’t see it their way. Their way was that Obama was like Robin Hood and taking from the rich to give to the poor. They have always been little socialists and pooled their allowance money into one piggy bank. NO ONE is ever allowed to spend any so I guess we should be very thankful that they are savers. Even Peter, at four, was counting campaign signs daily to try and figure out who was going to win, (pretty remarkable when his “sight words” began to include Obama and McCain.”)

When the day came for me to go and vote, (early and happily without a line) I wanted to take all three boys to experience it. After many speeches on how to act the boys still couldn’t help themselves and tried to peek and see who the person next to them was voting for.

Thank heaven most were neighbors and found the boys funny. When leaving with their “I Voted Today!” stickers proudly on their shirts we noticed a friend of ours was in the parking lot of the polling station with a sign, chair and pamphlets.
I stopped to say hello and then began walking with the boys towards our car.
Avery asked why she was standing there with a sign.
I told him that her father was running for an office and she was campaigning for him and asking people for their vote.
Avery, (very excited) asked, “You mean to tell me that she is John McCain’s daughter?”
Before I had a chance to reply Mitchell chimed in, “Nooooo Avery! Sarah Palin is John McCain’s daughter!” 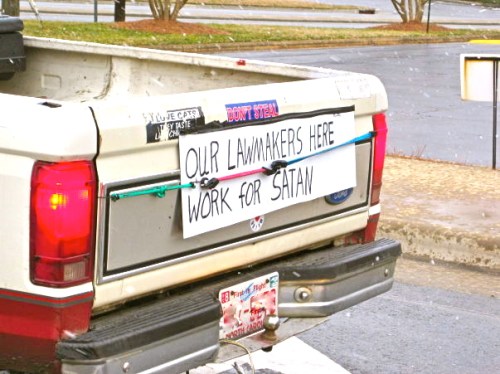