If you know me…at all…you know I would rather swim in acid than exercise at the YMCA or go to Walmart.

Our 13 year olds have heard of this “Black Friday” and begged all day for us to go see the people camping and fighting, like everyone on television was talking about.

Jim and I had given up and after a flight from Detroit to Charlotte we pulled over into a Walmart to show them nothing is going on at 9:30pm on Black Friday.
I decided to hit the grocery aisle so I don’t have to run out the next day and get milk and bread and a few other things.
Here is what happened while I was in the aisle next to where I am standing in this picture. 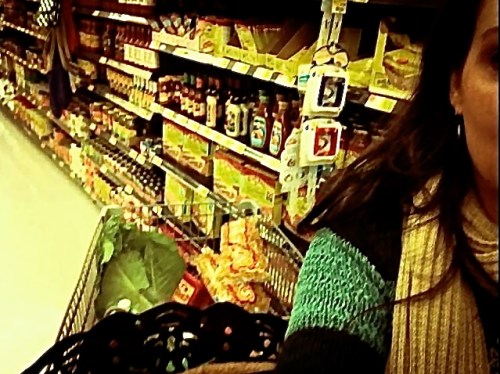 Me with collard greens for Bubba Watson, our pet bearded dragon and egg noodles for stroganoff.
Ok, I’m bending over getting egg noodles. I look rough.
I have layers on for the airplane and a random scarf to be used for either a coat, pillow or to hang myself if we get stuck on the tarmac for more than 45 minutes.
Rough enough I’m only willing to show you my shoulder in the picture.

A gentleman approaches me, stops, looks me up an down.
I make eye contact and smile. I can’t help it. It’s a reflex from working retail forever.
He says, “Mmmmm, m, mmmm”
I smile again at him but more of the smile a toddler makes when they are pooping their diaper.
He says, “You married?”
I say, (in a very surprising exasperated tone which I cannot explain) “Oh yes. Yep. Married.”
He says in awesome Chef from South Park voice, “We’ll that’s a damn shame. Your a fiiinnne lady. Uh-huh.”
I smile now in the franken-smile that is square. The one you make when the picture taker at school says “smile.”

As I round the aisle, the very one I’m writing this down from, I’m thinking…
Maybe I could stop by The Walmart once in a while.
I am still not giving into the YMCA, which is probably why said gentleman thinks I’m fine. Baby “got back” I’m afraid.
Smart people shop at the Walmart outside of Charlotte.

Eight years ago I walked into our local grocery store.

I, as always, smile while walking past people who are walking out.  I can’t help it.  I was raised in family businesses and later customer service and sales and it is just how I am wired.

I do all of my shopping and as I am leaving the store the man I passed, when he was walking out, walks back in and hands me a bouquet of flowers.

I was a bit taken aback.  I also am AWESOME at wearing my emotions on my face so I am sure I was looking at him like he was nuts.

He said he walked past me and was struck and thought he wanted to talk to me and so he went back in and bought me flowers and was waiting to catch me on the way out.

I looked down at my ring finger.

I pointed to my ring finger and said, “I don’t have my wedding ring on…”

Now I opened up my jacket to reveal my pregnant belly where Peter was growing and hunkering down prepared to not EVER exit.

“…Because I am pregnant and swollen.”

Then I told him that it was awesome that he bought flowers and took a chance like that.

I told him I appreciated it and that he made my day.

I told him to go give the flowers to his mother and that he should do it again to another woman and even again if he has to, because a good SINGLE girl is out there who would be so flattered.

He is lucky I was already married because, it turns out I am bossy and opinionated with all of the advice I was giving out.  He totally dodged a bullet that day.

PS I also had a woman compliment my purse at Walmart.  Have I found my people?  Am I a Walmart person and I didn’t know it?  OMG will I show up on one of those Walmart people websites?