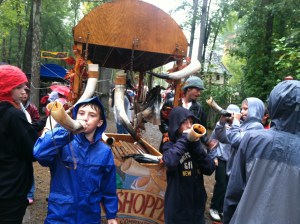 This is the ridiculous story of how I may be banned forever from chaperoning any field trip at school again. It is the story of how when faced with someone’s probable MOST EMBARRASSING MOMENT OF THEIIR LIFE I am standing with someone else’s son trying to determine whether to tuck her boobies back in or RUN...

This little corner of the Renaissance festival looked like an Ewok village from Star Wars. There were old-fashioned street vendor carts selling things scattered around. Some were open like the one in the above picture and some were closed like an old-fashioned wagon. This one in particular looked like the fortune-teller’s wagon in the Wizard of Oz. It had a little metal side porch for the person inside to get in and out. It had been raining fiercely and it was letting up. There was a woman who sold perfume in the porched wagon and had peeked her head out the window to see if it was safe to come outside. She then decided to step out onto the metal stoop of the wagon and held her hands to the sky, palms up to determine whether to venture out further.

Renaissance festivals are bawdy by nature and the costumes are made for every size and shape. It is a very “one size fits all” costume assortment. This woman was dressed like a peasant in a long brown dress with a large elastic boat neck and elastic waist. This woman was on the larger end, (I have to say it now so you understand later) she was at the largest end of the peasant dress spectrum. While this boy and I were bee lining it to the porta-potties we were also walking directly towards the bottom of the wagon stoop steps as the peasant lady decides to venture off the wagon and takes one step down and the back of her dress catches on the metal stoop.

The back of her dress catches but she continues the downward momentum but her center of gravity shifts and she is now going face down, feet up SPLAT into a mud puddle…but her dress stayed on the top of the porch. Well, most of it did. The neck was around her ankles. and she was face down in soppy, soft mud.

Do none of the people who work these festivals believe in bras? Is this the hidden underworld of the traveling renaissance people? Is the “Renaissance World” not about history but about women who don’t believe in wearing undergarments?!

I am standing there. This woman is laying there with one boobie off to the side and pointing straight at us and the other boobie is pointing down towards her feet and she lifts her head and spits out the mouthful of mud, (with the same shocked expression and manerism as if socked by a pie in the face) and I just realized this boy I am chaperoning is going home and telling his mom and dad that. “Mrs. ______ and I were alone at the field trip and we saw a naked woman.”

I am frozen. The boy is frozen. We are both frozen with eyebrows raised and eyeballs hanging out. Do I reach down and tuck her boobie that is closest to us under her? Or the other boobie that is further away? Do I lift her up and let her boobies hang where they are supposed to be for all to see? Her head is at our feet and she is looking at me.

I then realize this boy is now going home and telling his parents, “Mrs. ______ and I were alone at the field trip and we saw a naked woman and Mrs. _____ touched her boobies.“ I turn my head and look at this boy just as strangers began throwing their rain coats on the poor woman. Thank God. He and I walked briskly forward to the bathrooms not saying a word.

I failed. I am the girl who if there is a possibility to get a curling iron stuck in your hair it will stick in mine. Like stick “Lucille Ball style” on the top to your scalp and you don’t have to hold it because it is holding onto the roots and is perky like a cartoon curling iron.

Like a cartoon curling iron hidden under a towel turban until you unveil it to the hairdresser for help. Like so embarrassing you have to send flowers to the salon the next day as bribery hoping they forget your name.

Here is a naked peasant woman with boobies trying to run away from each other and I froze. Perhaps when I have to answer for this God will understand. Perhaps there is a “pass” for “curling iron girl” or “exploding egg girl”. For now I will have a moment of silence for “Peasant Woman” and say a thank you for the people who did come to her aid. I bet they never had rotten eggs explode on them and get stripped naked and hosed off in the front yard. I bet they never had to bribe a hair salon.

First half of this story from the day before: