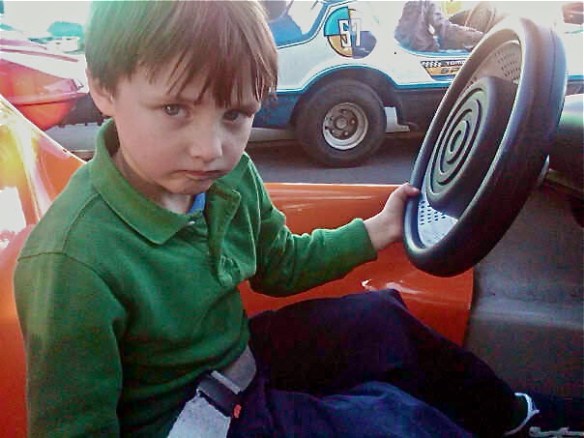 I wanted to document our Peter’s excitement when he crossed the finish line for the first time driving one of those amusement park race cars on a track.  Every year before he was too little and he had to sit beside me while his older brothers had their own car to command.  He was finally a “big kid” and the anticipation to be declared “driver worthy” was palpable during our lengthy wait in line.  This was a very big deal to him.  He grew.  He was a “big kid” now!  I whipped out my phone and snapped this picture just as he proclaimed…

He genuinely was disappointed in me.  As if every time I told my three boys to, “keep it down.  I am driving!” I was lying.

Oh Peter, I wish everything in life had a track to guide us and keep us safe.

Here is my post from yesterday in case you missed it.  I think Peter might hit the no good, very bad, “TWELVES” earlier than his older twin brothers.  Older siblings do that.  Youngest children grow up a little faster.

We watched “Extremely Loud and Incredibly Close” with our boys last night.

Honestly,  the thought of watching it didn’t appeal to me as I don’t like sad movies.  We are going through some growing pains with our twin twelve year-olds and we thought it might be a good idea to make them realize WE MIGHT DIE AND YOU SHOULDN’T BE SO STINKING MOUTHY TO YOUR PARENTS!  Messed up, isn’t it?

People kept telling us how lucky we were to have all boys.  It was going to make the teenage years so much easier from a parenting perspective.  They said things like, “Boys are a handful when they are toddlers but the teenage years will be so much easier.”  No one said anything about what two, twelve year-olds might be like.  I can tell you what I have observed in our home.

If you are ALMOST a teenage boy in our house…

– You are getting man parts but you still have to pinch the end “of it” to talk like you have done since your diaper came off.

– No one else’s feelings matter if you don’t get what you want.  This includes your little brother who has caused all of the worlds injustices because he cannot reach the upper kitchen cabinets to help unload the dishwasher.

– You don’t know how to make jokes and the results are horrible, awkward moments for your mom when you tease a friend that you think they are checking out your mom or you think it’s funny to tell visiting family members about the time your mom had to bring you underwear to school because you “tooted” and you “released a hostage.” 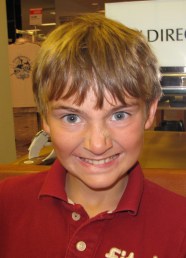 – Your voice is getting as loud as a mans but you are still yelling at the frequency of a little kid.

– The entire world revolves you and your desires.  This means no one should ever have to clean up after themselves and your mom should be waiting by the stove with her oven mitt in one hand and a skillet in the other. 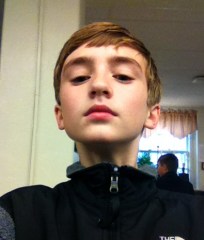 – You openly discuss what you have learned in health class and want to talk to your mom about sperm and “wet dreams” because you still tell your mom everything.  You scream at her things like, “I just want to know if this “SPERM” with the “FISH” that is going to shoot out of my pee-pee is a liquid or a solid?!”

– You get mad at your mom if she laughs or thinks anything is funny, (including the massive concern over the diameter of sperm.)

– Your parents are morons and you mumble under your breath that everyone is an “idiot” which doesn’t matter because your mom is one too and she wont notice.

– You have amnesia that you just got in trouble for calling people an “idiot” and act like you didn’t know your not supposed to.

– You scream that your parents are not letting you make your own decisions and you still sleep with an arsenal of stuffed animals.

I cannot wait until fall when our twins turn thirteen.  I hear it gets much easier.  If it doesn’t I am going to have a track installed.