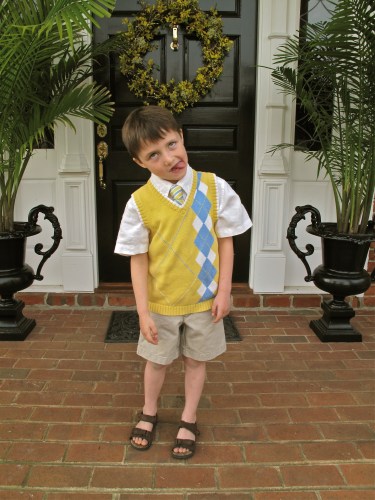 “Old soul” is so over used when our youngest kid says the funniest things.  Peter is a crotchety, disgruntled old man stuck in the body of a seven year old.  You all know the guy that became famous for sharing “$hit my dad says”, well his dad should know better!  When your young child starts saying this stuff you begin to believe in reincarnation, of Archie Bunker…
I am sharing with you today some of the STUFF Peter says…
When Peter was five years-old Jim was trying to wake up the boys early for breakfast.  He only had success with the older boys.  He lifted Peter’s blanket and said, “Time to get up!” Peter’s reply, “I keep trying to open my eyes but they keep closing. Can you just bring my coffee to bed?“
“You have to try my coffee this morning it is so good!”  I tried it, it was good…it should have been it had about a cup of creamer and a pound of sugar! When did he start pouring himself a cup of coffee and who told him he could?  He was five.
Peter instructed me that I was not to cheer him on during his first swim meet.   He told me I I was not to yell, “Go Peter! Kick, kick, kick, Good job!…” He said, “That is for BABIES!” I asked him what I may yell. He said, “ONLY ONCE you may say quietly in a Darth Vader voice, Go Peter”.  I looked so weird.
“I’m drunk on chocolate milk mom!!!!!!
And the next step is a bar fight!!!!!”
“Oh no! You gotta be kidding me!” I inquire as to what his dismay is about and his reply…
“Yesterday at tennis camp a kid had on this exact same shirt you laid out for me, (cute tennis rackets embroidered on it) and the other kids were whispering what a nerdy shirt it was and I was like yeah he looks like a super NERD, and now I have to wear the same shirt!”  I explained many lessons including Karma. 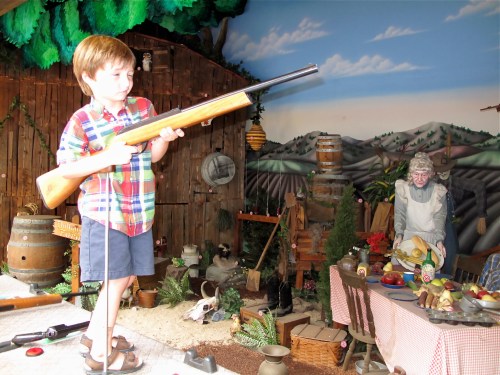 When Peter started kindergarten I asked him how school was going.  Peter, “Horrible. My assistant teacher is so mean!”

About a week later he came home from school and said, “Ms. No quit. I asked if she got fired but my teacher said she just quit.” Thank goodness we had a curriculum meeting that night. I asked his teacher if it was true she no longer had an assistant. She confirmed that Peter was correct.

Our kids have traveled enough to be accustomed to walking through a metal detector. What struck them all funny while entering a pro basketball arena is that were using the wand to manually scan people. Peter stood in line for a long time completely fascinated watching people step up and put their arms out and legs out while the gal went all around them. He asked if they were going to do it to the kids as well. He asked what exactly they were looking for and he asked LOUDLY, “What are you going to do with your pocket knife mom?!” I felt it best to ignore him like he was just some crazy kid. He showed me. He waited until the mob of people were even closer to the security person and said again, “Whaaaatttt are you going to do with your pocket knife MOM?” It’s always a good day when it ends without my kids getting me arrested. 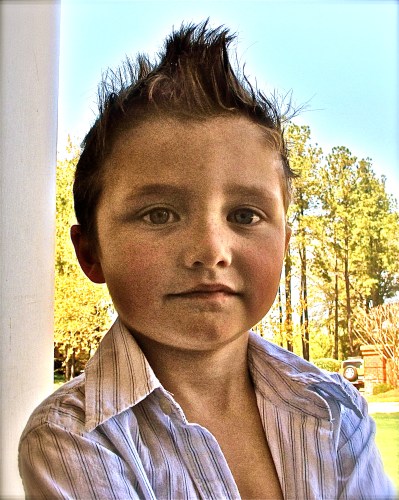 He came home from first grade with a picture he drew.  I spent FOREVER trying to figure it out so he wouldn’t be insulted.  It looked like a round person with lots of people in the persons belly and people traveling down the persons throat.  A mom having multiple babies perhaps?  I finally asked and wished I hadn’t.

His reply, “Oh. that’s Fat Bastard from Austin Powers and he’s all like…GET IN MY BELLY!  That is the guy being sucked in his stomach.”  For the record my darling husband let him and his older brothers watch a couple of scenes from the movie, when I wasn’t around, I found out.

Peter doing his kindergarten homework, “This is just ridiculous homework. She wants me to count our windows and doors. I’m only counting the doors that go outside.” He writes 8 for doors. Then I look down and ask him what he wrote in the space for windows, as I’m confused . Elliott, “I just wrote the symbol for infinity because this homework is dumb and I’m not walking around counting windows! Like I can’t count. I’m sure!”

Pulled over to fill up with gas on our way home to NC and Peter proclaims, “Free air! Why would anyone pay for air? It’s everywhere! It’s even in your butt!” 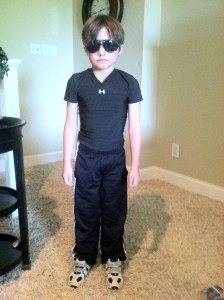 He said he was going outside to play

The kids had a random day off from school so I dragged Peter with me to run some errands. While at the mall and after telling poor Peter this was the last store, “I promise!” We were at the checkout counter when Peter did the thing I do to the kids when I mean business. Peter standing to my side said, “Mom” (to get me to look at his face) then he says, “Mom, I need you to walk back out of this store and through the mall with your eyes closed. Do you understand? No more looking…eyes closed.” (said out of the top of his eyes with a tortured look of Lurch from the Adams family.) 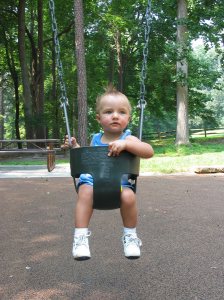 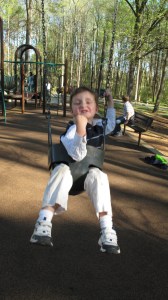 .
“Mom, since I cannot tell if my hermit crab is a boy or a girl…can I name it uniSEX? (said with the sex in a low slow whisper and a coy look on his face) You know, like a bathroom and not like a bad word.”

When the second year of swim season was about to begin I asked Peter if he wanted to be on the swim team again.  His reply, “No, and if you make me I will break my own arm so I can’t swim“ 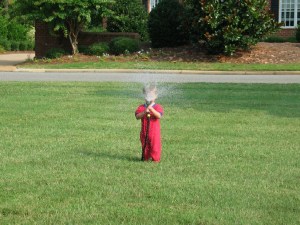 .
Jim’s mom was here visiting. I am pretty sure I’m going to win “Mother of the Year” after this one…Peter, as most people know, prefers his hair on the “longer” side. It is currently on the longest of the longer sides right now. Jim’s mom asks him if he wants to got get a haircut. Peter’s reply was that he likes his hair like this and that he is not losing “that” twenty bucks. Jim’s mom confused asks him what he is talking about and he says, “two of my buddies and I have a bet who is going to get a haircut first and Will already got his cut now it’s just Andy and I left.” I was speechless and yet supportive of his endeavor and also certain none of them have thought about where the 20 bucks was coming from. 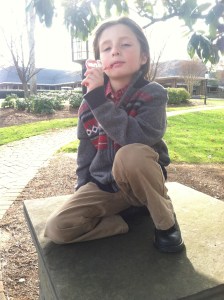 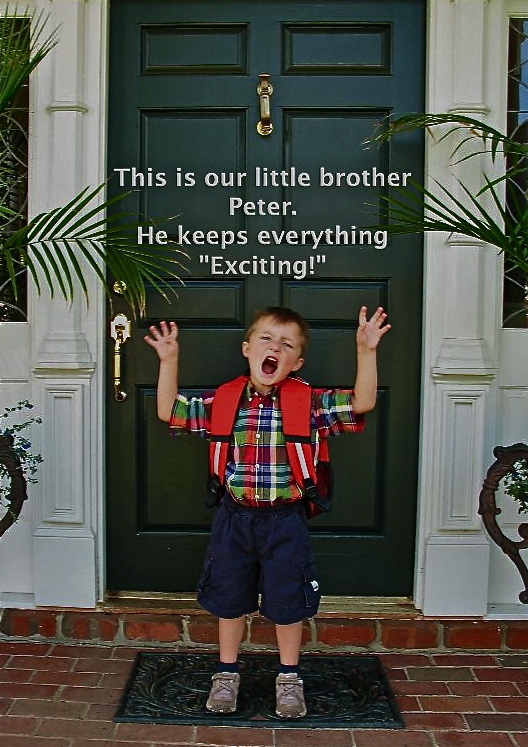 Peter’s perfect Saturday morning…Star Wars computer game..rockin the head phones, in his underwear, at his big brothers desk. You cannot keep clothes on him! He would live on Hot Tamales…he is so strange!
Peter woke up recently chuckling. I asked him what was so funny that early in the morning. He replied, “Oh, I dreamt about tasing the Tooth Fairy. She was all sneaking and taking my tooth and I was like…my mom emailed you to leave it and the money! Then I taser her! It was so funny when she was like ahhhhh!” 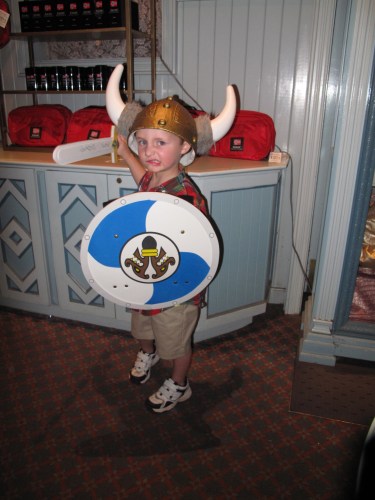 He really is a sweet boy and will grow into, were hoping, a funny old man.  Read about our other two boys on the “Us” tab.  Follow my blog if you enjoy hearing about real kids who aren’t crafting all day and are in a Harry Potter book club and are usually barefoot in a creek with a golf club.  That is us.