I am not a big fan of bowling. Growing up in Michigan there wasn’t much to do for the long months that winter lasted. Most of my bowling memories involve being dropped off in a smokey bowling alley playroom (kid jail) while the adults played on their league. 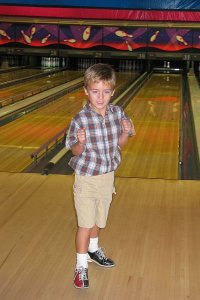 Here is Avery another time bowling and despite having pins left I am sure in his head he’s saying, “Take that!”

I am, however, a fan of charity events and charity events we can socialize with our friends. We have a fab circle of crazy friends and those crazy friends have kids that are just as much fun. I have some good friend stories I will share as soon as I feel like I have gotten to know you better. 😉

We took our boys to our local “Bowl for Kids Sake” with all of our usual group from “The Club”, (sounds ridiculous so I had to.) There were news crews, and local celebrities and lots and lots of families.

The grown ups were supposed to hang behind the kids giving them any advice or money for junk food. The adult moms all had a powwow via text before and we were wearing our cool jeans and high heels and no talk of bowling shoes with split personality disorders. We were going to drink beer out of a pitcher and eat pizza. We were going to have a bowling night without bowling.

You have seen the sitcom Friends? I could never understand how we could convince an entire country to invade another and we couldn’t convince the cast of “Friends” to continue entertaining us FOREVER, (said in the Sandlot movie voice.) Anyway, remember Monica Geller? Yeah, I turn into Monica Geller sometimes. Not in the Monica cleaning way but in the, “I’m gonna kick your a$$” competitive way.

Well, first one of the guys in our group goes to throw the ball in the lane next to us and as he bends over his jeans split from his knee on the inside seam all the way up to his crotch. I have NEVER seen anything like it. A gaping hole.

Want to make it better?

News crew! I have no self control in these moments, I admit I was snorting laughing and “Captain Commando” was too!  The news crew camera guy came to the rescue with a roll of duct tape and they were taping up his pants another “Dad Friend” says, “Hey Abbie, I’ll play against you.”

Our lane is empty because the kids are all gone to the arcade. I have on the cutest pair of espadrille heels which are not allowed. I look over at the shoe counter. I am so not standing in that line to wear someone elses shoes that haven’t even had ample time to let the sweat dry out.

I agree to one turn each as I am going to have to SNEAK and play in my smokin’ hot shoes.  I am going to prance myself up and show off in front of my husband behind me and more importantly, I am going to kick “Other Dad’s” a$$!  Game on!

“Other Dad” throws the ball twice and leaves 4 pins. I sneak up to make sure no one is looking. I was really, really sneaky looking.

I throw the ball and my feet fly up in the air and I land on my back.

Yep, completely laid out. Not even a sip of beer had. I am still on my back and I look back behind me to see all of our friends cracking up, (always happy to give them comic relief) then their faces changed to mouths open staring over my head and I turn around to see my STRIKE! 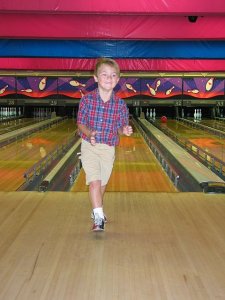 Mitchell has also inherited my self confidence and excitement!

I am an awesome bowler. 😉 They of course noticed my shoes and I was informed of the rules but who cares because I WAS THE CHAMPION!

The Monica Gellar in me would also like to state that “Captain Commando” did NOT score a strike during his embarrassing moment. I will however concede his moment was more embarrassing.  I am getting rather sick of that honor so he can have it.

If you enjoyed this post read, “Exploding Eggs and Nakedness…Typical Sunday with Family”