Everything BAD I ever learned, I learned from a cousin!

Birds and the Bees and Other Stuff

I knew where babies came from long before my friends at school and then I knew about all the stuff middle schoolers do before they even think about making babies.  My older cousins told me about what was happening in junior high.   It terrified me as an elementary school kid.  It is also probably why I was scared into not even having a boyfriend until 9th grade.

It was the Fourth of July and a different cousin and I were using cigars to light fireworks down a dirt rural road. I found out that night that not only were we too young to smoke even a cigar but fireworks were illegal in Michigan.

I learned to push my car down the driveway so that we didn’t wake up the parents.  I also learned to push start a stick shift, which is no easy feat for a 15 year-old and a 16 year-old that weighed less that 100 pounds.

Sneaking Into Bars and Getting Served at 16

This was easy back in 1988.  Hair was huge and makeup went on with a putty knife.  They couldn’t see how old you were through the layers of on gunk on our faces and shoulder pads definitely make a young girl look older.

You could drive 50 minutes and all you needed was a drivers license to cross the border.  There were no cell phones so you just needed to “sleep over at a friends.”

A gallon of pool chlorine dumped on your hair will give you a “sun-kissed” hairstyle for summer.

There is even so many more things like, you can drain a chocolate covered cherry with a toothpick and spit in it and feed it to your babysitter.  Want to get even with your sister?  Put neon poster board in your house windows that announce when your sister started her period just before her afternoon school bus goes by.  Stay out past dark and know you are in trouble?  Just toll around in the dirt and smear lightening bugs all over you and tell your mom you were abducted by aliens and that is why you didn’t make it home before the street lights came on.  Moms can’t yell if they are laughing.

I have said it a million times, long line of wack-a-moles is where I have derived my lineage.

This all was learned through cousins, (who probably learned a lot of it from my mom who acted like THEIR older cousin..

Your friends are afraid of your parents.  Your cousins aren’t, at least mine were not.  My mom was passing many of these “gems” onto the cousins that eventually taught me.

This is why we live ten hours away from my own kids cousins.

They are all OUR CHILDREN and Lord knows we were bad, bad, bad.

We heard regularly how bad our mothers were from anyone in town.

I am not telling my kids.  They think we come from a long line of book readers and college class takers.

I am breaking the cycle with silence and denial.

These kids all think I am so boring and square.  They say things like, “You want some NUTS and then they all giggle like I don’t get it.”  They make up songs about drinking beer because it rhymes with Brittany Spears.

Peter confessed and told me a limerick he learned on the bus.

I was so disappointed.

Cannot believe I am saying this but, I would have made my Mom proud.  The one he told me was so boring I couldn’t have him walking around teaching other kids this lame rhyme.  I gave him a good one to share on the bus the next morning.

Yes, my Mom taught it to me & it has “ding dong” in it. I’ve yet to be called by the school  office for any of them…but this one, I thought I might.

Then he asked me who King Kong is.  Never mind.

I realize I have to let them have a little fun, but we have all been having a LOT OF FUN! 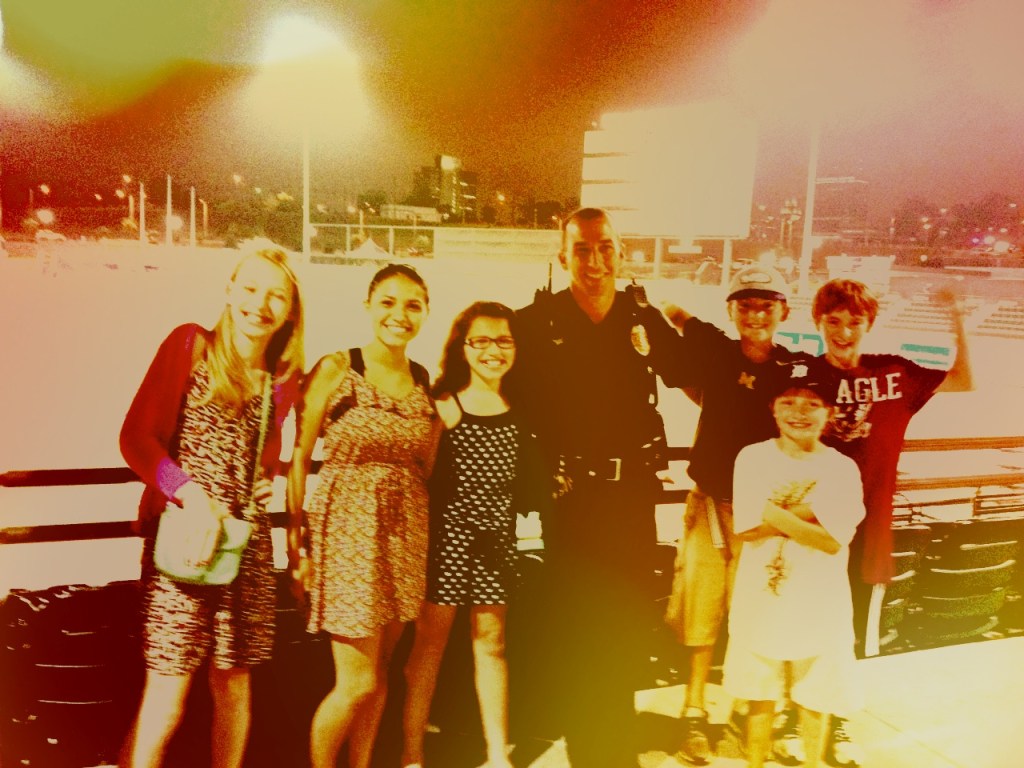 We stayed at a minor league ball game until almost 11 last night.  Mitchell caught a ball and then stood at the dugout and had a player sign it and then he gave it to his cousin, Eileen who is in 3rd grade.  I was so proud.

Who did they chase down to have their picture taken with?  A police officer.  Such smart kids!  I once convinced an entire Detroit Swat team to let me and a car load of boys go, return our alcohol, (driver was not drinking) and write down directions to the club we were going to, when I was 16.  I told them that when I told my dad that they stuck a gun in my face and frisked me he would not be happy.  I also told them it would be insane to think that a 16 year-old girl could be stealing cars and taking them into a Detroit alley to be chopped.  I mean, really, a helicopter with a spotlight on us?!

See, my kids do not need to hear ANY of these stories!

The Bethenny Frankel Show Called Me About the Fifty Shades of Grey!