I was tickled my ten year-old “lucky pants” still fit and I could wear them to the concert.  But…there are no pockets on the butt?  I don’t remember them not having pockets.  I spun around many times in front of the mirror.  Did we not have pockets on our butts ten years ago?

Ten years ago my butt didn’t need pockets but this new, old butt needs pockets to break up the junk in my trunk.  Confuse them is what I always say, use ruching, scarfs, a cardigan, a blazer, blinking light on my forehead.  Not not really a blinking light but if I can’t get this tube top you wear around your waist to take off as the “next thing” or a “belly warmer” as I call it, I may start wearing an orange traffic cone as a hat.  My number one piece of fashion advice…distract.  I am always trying to distract from my belly and my butt.

My lucky python plastic pants have no pockets to break up my rear.  They went back in the closet to trigger the memories of when I could run away with a rockband, (The Barenaked Ladies.)  Stop being jealous! 😉

I wore regular old blue jeans.  Here we are having drinks at a fine establishment (pool hall.)  Notice that I am not dancing on the bar, (if you don’t know what I am talking about wait for it at the end.) 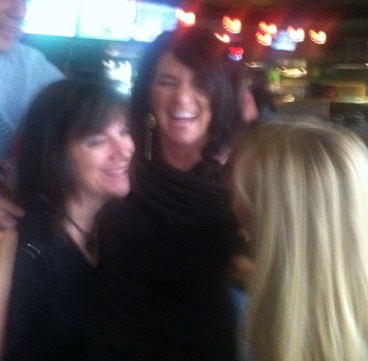 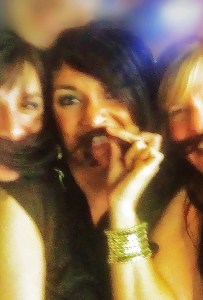 Here we are with one of those mustache pacifiers all of the babies are sporting on Pinterest.

The problem came up when we went to leave the pool hall.  We had a driver pick us up at home and drive us 40 minutes to the concert.  He dropped us off by the coliseum so we could walk around and eat and have a few cocktails.  He would come back later and get us.  We just had to walk several several blocks to the actual venue.  This is not a problem.

The problem was when the husbands were paying the bill and we girls walked out front and stood under the awning we saw the impending doom that was heading towards us.  It was the ugliest thunderstorm and it was about to unleash on us.

I have feathers in my hair!  They are going to get wet.  I want to look good when the band begs me to run off with them.

Why the hell didn’t I wear the PLASTIC python pants?  The lucky pants are waterproof!

The other girls began walking to try and beat the rain but I saw the sprinkles the size of saucers.  I stayed and looked around at the people at the tables under the awning.  I looked over at a bushy, bearded kid in his early 20’s and said, “Do you have a car?”

My girlfriends are now dodging back under the awning.

He laughs at me.

I’m like, “No, totally serious.  I will pay you twenty bucks to drive us there to the concert.”  I point to the coliseum.

My girlfriends are now laughing at me.  I ignore them as I am negotiating a deal.

He says, “An old explorer.”

I say, “Oh good, then the guys can come too.  Do you promise to not steal our kidneys?”

He says, “I will NOT steal your kidney.  I will pull around and get you.”

Just then the husbands come out and look up at the sky and voice their dismay over letting our driver leave and announce there are zero cabs around.  Then they take charge and tell us ladies to make a run for it.

The entire last paragraph was said while I rolled my eyes.  Thank you Captain Obvious.

Men don’t wear tight jeans and platform, high heels.  They certainly would not be able to run in them uphill in the driving rain and they would not mess up their hair that they put all the cutest little feathered clips in.

I tell the husbands that I have this sweet, hippie kid taking us and I am paying him $20.

Then men start walking in the rain.  They yell back for the girls to come on and tell me I am not getting into a car with a stranger.

The other girls start running after their husbands.

I yell out that I am a good judge of character and he promised to NOT steal our kidneys!

The men yell back that it is crazy and for me to hurry up.

I yell out I will take my chances with my cute hippie.

The rain turned into a monsoon.

My husband yells, “I am going with Abbie!” and runs back under the awning.

The hippie kid pulls right under the awning to get us.  As he drives past us we read his license plate…

No one kills people or even steals kidneys with a personalized license plate that reads, “Trees Roc.”

The Hippie Kid had to move his tennis racquet and golf clubs to make room for us all int eh suburban.  I think he is a tortured soul.

My feather clips gave me hours worth of entertainment.  I clipped them onto unsuspecting people at the concert to give the a “rat tail” and then took their picture. 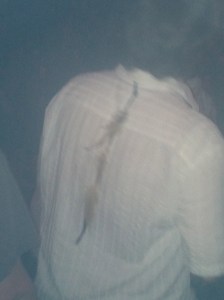 Sometimes you just have to trust someone.

Or not, judging from my photos of strangers.

How about you?  Do you get out and pretend your not a mom or a dad once in a while?  It’s just for a few hours!

This is my previous post about my lucky pants… 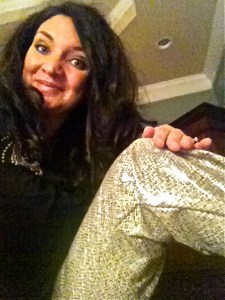