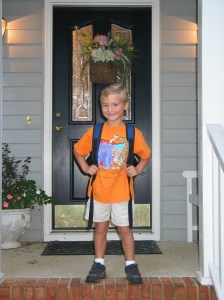 You know those kind of days…when the kids are begging to get a shot when they go to the pediatrician for their check up?  You know what I am talking about.  Every time one of my boys finds out his brother has a doctors appointment and he doesn’t the first thing out of his mouth is, “Is he going to get a shot?”  It is then followed with begging, “Can I get a shot too?”

It is true.  I know your waiting for a punch line.  There isn’t one, but if you wait until the end of the story I think I will make you laugh, or pity me or both.

Our youngest, Peter, started crying recently when the doc said the office was out of the flu shots and they only had the nasal spray form of the immunization.  I am, as usual, in the corner cracking up at my bizzaro world when the docter keeps saying things like, “You want a shot?  Let me go through your charts again and see what shots we can give you.” 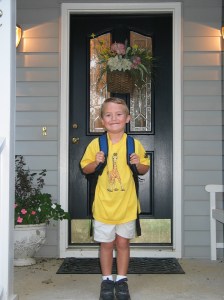 You see, our pediatrician has a prize box only for kids who have to get a shot.  It has created this weird alternate universe in our home.  I even began wondering if they gave me the wrong baby at the hospital, three times.  I mean, I DROPPED the doctor to his knees during my “getting ready for kindergarten” shots.  It was legendary.  I was country, when country was uncool.  That means I wore cowboy boots and cracked him between the legs when he stood in front of me, (he had to give me the shot because the two nurses had to hold my arms down.)

There was this one time I saw myself in my boys.

I scheduled the twins for their “getting ready for kindergarten” eye exam.  They were five and our youngest, Peter, was still a baby and not in need of an exam himself.  We were at a local pediatric opthamologists office and the waiting room was packed.  There were so many kids with their moms, an occasional dad and some of the “saint” variety of grandparents, (the ones that take their grandchildren to doctors appointments.)

We waited and waited and finally they called us back into an exam room.  I had both older boys and Peter in his baby car carrier on the floor.  The doc asked who was first and Avery replied that he was first since he was the oldest by four minutes.

Avery climbed up on the table and the doctor began pressing the foot peddle lowering Avery back in the chair and into a reclined position as he also pulled down his fancy machines that are mounted to the ceiling.  They wrap all around my tiny little guy who is so brave.  The doctor then announces…

“Now let’s take a look at those eyeballs!” 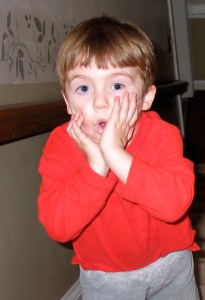 I look down at Peter all…good…and unable to speak, (yet) and all…GOOD and easy.

I dart out the door after Mitchell who is standing at the opposite end of the LARGE waiting room, it is now filled with crying children and adults giving me the evil stink eye.

Those people staring at us had to wait a very, very, VERY long time to be called back for their own appointments.  That doc explained everything he was going to do to each of my boys, BEFORE he did it and to each eye and with great detail and, again, for a very long time.

I didn’t see myself in my boys in the way that you either have that “fight” or “flight” instinct inside of you.  I saw that they now had their own “legendary” “getting ready for kindergarten” story.  It was almost as legendary as the headache I had the remainder of that day.