I have two stories. One makes you cry and the other makes you pee yourself laughing. Since it is Monday I am going to tell you the story of one woman’s, (me) amazing birth of a farm animal, (sized baby) in front of two four-year olds and while miraculously being cured of a latex allergy. My first pregnancy was a twin pregnancy, (the Kleenex story.) This story, (the Depends story) is about my second pregnancy which was supposed to be easy and uneventful.

Stay with the story because at the end you will be calling me a liar until I prove it all with pictures. I can prove about anything with pictures. I snap bad pictures with my phone, (usually) of everything. Want to see Peter’s first poop in the potty on his second birthday? I have it and it is actually super cute, not the poop but his expression and unabashed nakedness. Oh, I will just save it for another post. 😉

I had twins the first time around six weeks early and weighing in at, 5 and 6 1/2 pounds. Oh yes, I am a breeder. I began the pregnancy at 103 pounds and my belly measured 47 weeks pregnant at 32 weeks, (I am also 5′ 3″) and I went two more weeks. When I was pregnant with Peter I made my physician husband do three EXTRA ultrasounds on me. I knew there was another one in there somewhere. I felt as big at I did with twins.

We had just moved several states away and we didn’t know anyone really. We didn’t know anyone well enough to drop our preschoolers off at their homes. My biggest worry was I would go into labor early and I would have to take our two four-year olds to the hospital with us. I was prepared as I could be. I had little bags pre-packed with dollar store toys and candy and there were lots of small things individually wrapped to entertain two little boys while we were at the hospital, just in case.

The boys and I went to Build-a-Bear and we made their new little brother a bunny to bring to the hospital after Peter was born. We had my mother-in-law fly in for ten days around my due date.
At some point I had a blood draw to see if I had gestational diabetes (I get that gigantic) and the band-aid they put on my arm afterwards caused a chemical burn. Someone noted this in my charts. Someone noted that I had a “latex allergy”. I did NOT have a latex allergy. It was from the glue on the band-aid. I hear from commercials on TV that it is hard to get things like workman’s comp, insurance settlements and relieved of your debt. They strongly urge you to call “The Law Offices of _________”. They should do commercials about getting a false “latex allergy” off of your medical charts.

During my OB appointment, on my due date, I mentioned that my MIL would be leaving soon and since I was sure this baby was already double digits I would like to be induced. Isn’t that what all you girls did? Everyone I know who asked for induction got it. He checked me and said the baby hadn’t dropped so I was sent home.

A few days later I went back in and told him I had contractions. He checked me again and said he hadn’t dropped and sent me home.

Two days later, (haven’t slept due to contractions) the doc saw me and confirmed that the baby was indeed large but NOT ten pounds as I was suggesting but closer to eight. He said he would send me over to schedule the induction since an eight pound baby was big for someone my size. Yippee!!!!! So I take myself over to the hospital and call my husband and MIL.

The nurse meets with me and says, “Ohhhhhh, so I see you have a latex allergy.”

I am all smiles and eyelash batting while rolling my eyes and say, “Oh that was just from the glue on the band-aid. It has happened before with certain brands.”

She hands me a pager, LIKE AT THE FLIPPING OUTBACK STEAKHOUSE, and tells me to go home and wait for a “latex allergy free induction room” to become available.

I go home and cry. I rock in the rocking chair for two more days holding that pager. There is no sleeping because of my contractions. My MIL is leaving the next day and so I go and buy 40 bags of mulch and load and unload them. I then haul them all over my front yard and spread them. Why won’t my water break like the first pregnancy?! I go back up to the nursery and rock and think about my MIL leaving the next day and what am I going to do with two boys at the hospital?

Here is where Abbie lost her mind. I don’t lie. I tell the truth to a fault. I wish I could lie better. Everyone needs the ability to tell a little white lie for the greater good. Jim is now home from work and I will have no one to watch the boys when MIL leaves the next night. I have no choice.

I announce with excitement, “The pager went off!”

We decide that we would all go to the hospital so the boys can see me off and then MIL will take the boys home. We all walk up to the maternity ward and I roll my little suitcase up to the desk and announce, “Hi! I am here to be induced. My pager went off.” Smiling, smiling, smiling.

Those women at that desk know everything. Before she even looked down at her paperwork she looked at me and said it all. Her face was saying, “Lady, aint nobody here paged you and I don’t care how big you smile and how nice you are…NO ROOM FOR YOU!” 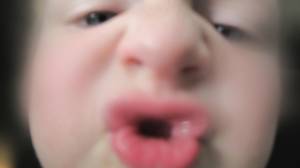 NO ROOM FOR YOU!
(Photo is actually Peter)

What comes out of her mouth is instead, “Ohhhhhh, you have a latex allergy. We don’t have a latex free room available. I don’t show that anyone paged you.”

My bottom lip quivers and I look over my shoulder at my crew. I then turn back around at her and say, “Yeah but since we are all here and I don’t REALLY have a latex allergy and my MIL is leaving in 24 hours can you just do it in a regular room because this baby is huge and I am having contractions and I haven’t slept in days and please, please, please…”

UPDATE: Part 2 Here After This I Deserve a Bellybutton Restoration

Thanks for reading and “follow me” for “All that makes you…”