I will be asking myself what the heck I ever did to you to deserve you giving my son this “evil doing” machine.

Don’t make me mad, or else I will be buying one for your kid this Christmas! 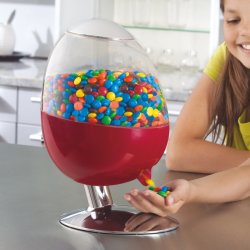 Don’t be fooled.  It just looks all nice and fun.

Look at the speed in which it shows the candy coming out.

Now picture three little boys gathered around and their (sarcastically said) “impeccable timing” and you can just imagine the “hit rate“for the  candy making it into closed hands.

I keep picking the stinkin’ thing up to put it away (like off kitchen table or front porch or couch…) and the stupid thing shoots hard candy across the room as I’m holding it and as I try to turn it off I cause the motion sensors to shoot more!

It was just sitting on my kitchen counter, all alone and childless.  It was looking sad without having a child gazing upon it smiling.

It needed to fulfill its destiny.

It needed to make cavities, jack children up on sugar, and shoot sticky things across my floor to attract bugs.

I think “it” was just looking for an excuse to mess with me.

All it took was some sunshine hitting the motion sensor to invite me to one of its “candy parties.”

They were skipping across the countertops like Mexican jumping beans and then hitting the hard floor and rolling and bouncing everywhere.

I am now cursing “It” and my “Rock Star Parent” friends that bought it. 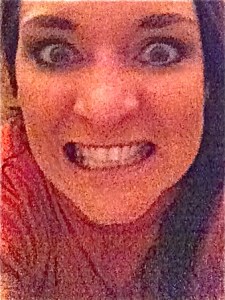 It was all “Christine” the car from that scary movie excpet it is a possessed candy dish.

This is what the terrorists are making now to mess with us.

It is a subtle plot.  They have gotten a bit passive aggressive.

I told my kids the candy dispenser has been recalled for impregnating candy with lead.

I also told them parents have been advised to throw it away and have children scrub their  mouths with toothpaste for ten straight minutes.

I also have to scrub my mouth for the cuss words I managed to string together.

If you are a dentist and want that extra week at Martha’s Vineyard I would advise sending these to every family with young children that are patients of yours.

What is the worst gift someone has given one of your kids?

All that makes you…

It was featured here on BlogHer

It was featured on BlogHer