Well, here is the story about probably the most inappropriate thing that was ever said in a Build-A-Bear.

Because what my funny kids did to me there ten years ago apparently wasn’t embarrassing enough.

Because my kids are auditioning for Jacka$$ 2023, EVERYDAY.

Our youngest has had a bunny from Build-A-Bear since before he was born.

When I was pregnant with him I took our four year-old twins to build “the baby in Mamma’s belly” a stuffed animal to bring to the hospital.

It was a very sweet day.

But you aren’t here for that.

The “embarrass Abbie moment” is coming up.

First, you have to see I am TRYING to raise good and normal boys.

They made a wish for their little brother while holding the little red Build-A-Bear hearts.

They gave them a kiss and the two hearts were sewn up into the bunny.

When Peter began talking he named his bunny, well…Bunny.

After the lady at the store filled the bunny up with fluff the big boys went to bathe and brush the bunny. If you have ever been at a Build -A-Bear you know there is a fake bathtub that is really a table that looks like a cartoon bathtub and instead of spraying water it shoots air to fluff up your new friends fur. 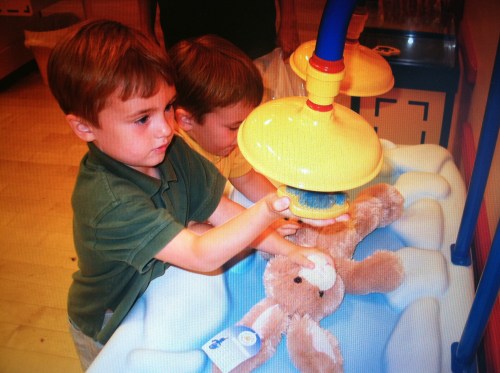 Until I looked over and one of my twins was LAYING ON THE FAKE BATHTUB while his brother was giggle screaming blasting him in the face with the air nozzle.

No.  There are no pictures of that.  I was too busy wobbling over to stop them.  Remember, the child came out 10 1/2 pounds which is why I wrote “My Bellybutton is Now a Cupholder.” Click this for THAT “funny” story (at my expense again)

So we laughed for a few years about that and our youngest really begins to love his “Bunny.” 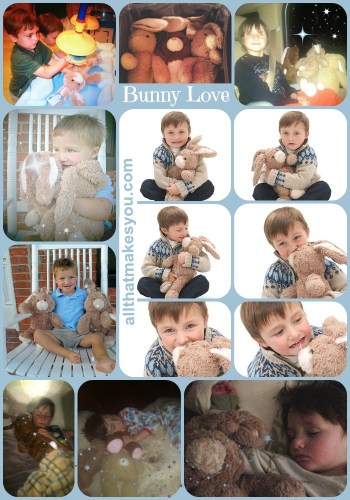 He loves it so much that when he turns two he wants a “new” bunny that he names New Bunny.

Eventually there is a birthday party at the store for a friend and he picks out…you guessed it, a NEW “New Bunny!”

For all these  years the trio of amigos sleep with him every night.  They go on trips in suitcases and they are well loved.

For being a tough guy, he is shameless about having his bunnies with him.

He also spends a great deal of time putting them into situations where “kill the bunny” would be an appropriate title.   The kid has issues to work through with having two big brothers beating him down all day. 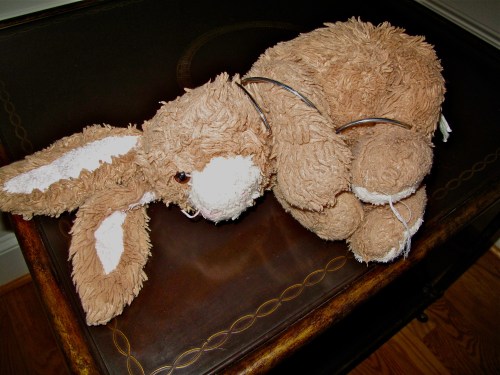 When I found Bunny in this “situation” I feared Peter had found a copy of “Fifty Shades of Grey” so I wrote a little ditty called “Poor Husbands and their Wives’ Naughty Books” and you can read that by clicking HERE and read the funny about the Bethenny Frankel show calling me about that piece HERE.

Flash forward ten years and we are at the mall Saturday buying the big boys new tennis shoes.

Peter is being patient  but does ask to go into Build-A-Bear.

If you have a youngest child, that means you know you are done having babies these things are bitter sweet.

This was probably going to be the last time any of my kids will want to go into that store.

Even his big brothers recognized it.

He asked to get another bunny.

His big brothers and I talked about when they laid onto the bathtub and how their little brother’s first bunny has two hearts inside instead of one. 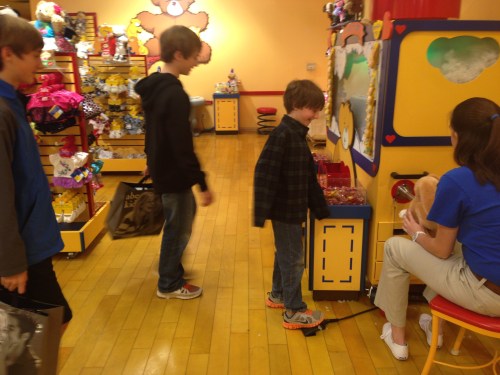 We stuffed his new bunny and went to the register to pay in a long line, the kind of line the store only has on a Saturday.

It was our turn.

The young girl smiles big and leans in and asks sweetly,

“Does your new bunny have a name?”

I am waiting for the “New, New, New Bunny” reply when his raspy little voice next to me says,

All I can think to do is dive into the imaginary fox hole cartoon style because I know what is coming next and judging by the looks on his brothers faces, they would be jumping in that fox hole right next to me.

We all know what “Herbert’s” last name is in our house.  Herbert is the guy from “Family Guy.”

Actually, as soon as “Herbert” was said one of the twins RAN out of the store.

I was making the “Nooooooooo….!” face mixed with the poop face. 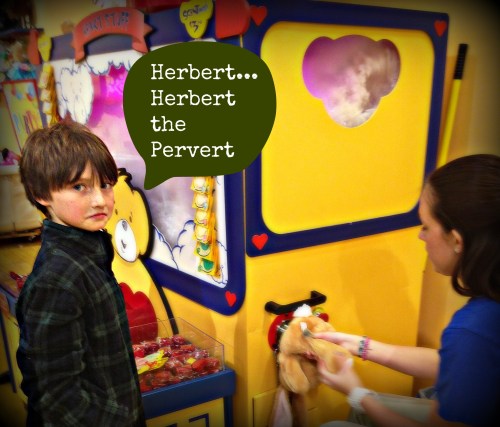 You know this guy…

I am now making the squinty eyes smile face at the sweet sales girl.

“Well, I guess you won’t be sleeping with HIM tonight!”

I instantly wanted to high five her.

Like jump up and give her the “we women unite against these smart as$ed boys” high five!

I also strangely wanted to high five my own little smart as$ed little boy because he did that thing his mamma does that makes me, his mamma, giggle.

I like to say things to make someone uncomfortable and keep a straight face.

You know like the time the twins stuck their heads in the urinals at preschool.

When I told the teachers that I dunk their heads in the toilet when they have an accident to try and explain WHY my kids would dip their hair in the school urinals.

JUST GO READ THIS AND IT IS WAYYYYY FUNNIER THAN THIS, but come back, ok?

His timing.  The pause and then the straight, matter of fact delivery of “Herbert.  Herbert the Pervert” with not a smirk in his freckled little face just made me think that they did indeed give me the right baby back after they cleaned all the baby juices off of him that day he was born.  I am still a little dazed after giving birth to DOUBLE DIGITS, AGAIN!

He not only meant to deliver uncomfortableness to this poor sweet girl, he was trying to embarrass his brothers and me in front of this giant line of folks.

My tag line on my blog and Twitter and Facebook and all my accounts is usually something along the lines of, “Abbie Gale is a writer & humorist at AllThatMakesYou.com while raising the next cast of Jacka$$ while married to a Dr who asks her to cover her cleavage as it reminds him of work…”

I am not kidding folks.

My life is a sitcom.

I burst into squeals between the sales girls response and the fact that my nine year-old pimped his brother to the point he sprinted out of the store and he was also able to keep a straight face when I was reacting to just, “Herbert.”

(for being awesome and then I would have to hire her to correct my punctuation on my blog but we would be fast best friends because she is awesome, like me, the farm animal incubator)

…and still let her know that she rocked dishing it right back to my little stinker.

Yes, little tear in my eye when I realized our Build-A-Bear family circle started and ended in a ten year span, at the very same store where it all began.

Who would have ever thought two little boys, that almost made me run out of that very same store ten years ago while they crawled onto the “bathtub”, would eventually be running out embarrassed their little brother was telling the store clerk that he didn’t name his bunny “New New New Bunny” but instead “Herbert the Pervert.”

Also I am pretty sure we are on a “no serve” list at “The Bear” after this one.

I am ok with it.  I have a vacation home spent on Build-A-Bears.

Like and subscribe to my Facebook page (I am on there all day): All That Makes You
Twitter @allthatmakesyou
Follow me Instagram: (where I hang out): allthatmakesyou
Email me at: allthatmakesyousmile at gmail dot com
PS If you are a publisher or producer email me and I will give you my phone number. If you are Child Protective Services email me and I will give you the phone number of someone I don’t like. If you want to come and help me fold clothes and put them away I will give you my address and a big kiss.
I also Sell Rodan and Fields skin care products and if there is anything I can help you with to make you feel better about how you look please let me know. 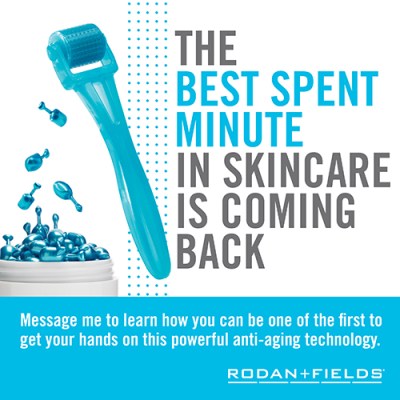 When I look good I feel good.
Click on the picture above to learn more about devises and products you can order to use in your own home.
You might enjoy these stories and further proof the kids are all NUTS, (and they might get it from me.)
1. Signs You May Be Raising Huck Finn, Tom Sawyer or a Mark Twain Character
2. Recovering Emotionally From River’s Carnivorous Seaweed
3. How to Tell Your Lawn Guy You’re Very Sorry (Because Never Mind the Toys Snake That Was Dog Poop You Were Rolling Around in